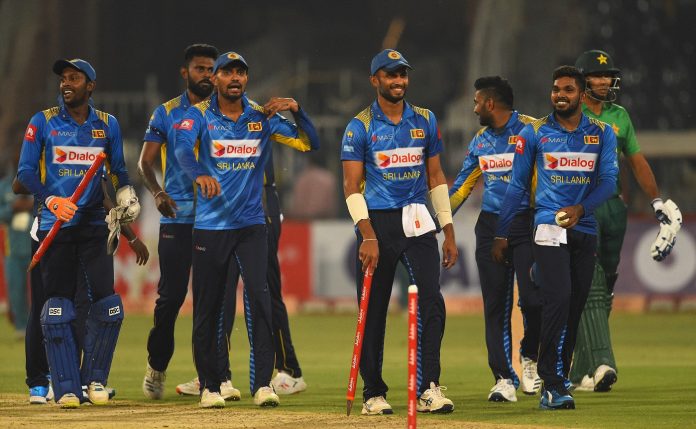 PESHAWAR: Sri Lanka defeated Pakistan in the second match of the three-match T20 series by 35 runs at the Qaddafi Stadium I Lahore on Monday and won the series 2-0.

Sri Lanka decided to bat first on a good batting track and scored 182 runs for the loss of six wickets. Bhanuka Rajapaksa was the pick of batsmen for Sri Lanka who scored 77 runs, Jayasuriya scored 34 and Dasun Shanaka scored 27.

Pakistan’s bowlers failed to impress again as they could claim only three wickets, while three Sri Lankan batsmen were run-out. Imad Wasim, Wahab Riaz and Shadab Khan took one wicket each.

When Pakistani batsmen came to bat, it was the same old story with the exception of Imad Wasim who scored 47 runs. Captain Sarfaraz was looking good, but he lost his wicket on 26 and Asif Ali scored 29. Pakistan were all out on 147 with one over to spare due to brilliant bowling of young Sri Lankan team.

Against all expectations, the top-ranked Pakistan has lost series to eighth ranked inexperienced Sri Lankan team and that too on its home soil, which is a huge embarrassment. Questions were raised on the team selection and the selection of the playing eleven for the two matches was even more worrisome.

Pakistan made the gamble of playing Ahmed Shahzad and Umar Akmal in the first match and both misfired. Both players surprisingly retained their place in the second match and both failed again. Umar Akmal’s comeback was even more disappointing as he was out for a golden duck both times. Iftikhar Ahmed, who played sensibly in the first match, was surprisingly made to sit out in the second match for unknown reasons. Meanwhile, talented middle order batsman Haris Sohail also continued to warm the bench during both the matches.

“We didn’t play good cricket. Congrats to Sri Lanka, who batted, bowled and fielded better than us. Old players were called up because of their performance in the domestic cricket,” said Sarfaraz after the match.

The next match of the series will be played at the same venue tomorrow (Wednesday).