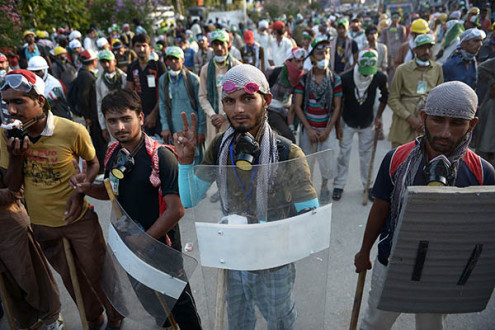 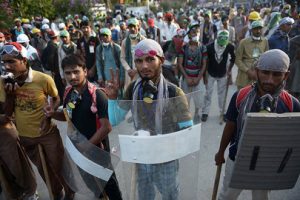 PESHAWAR, August 20: The participants of Pakistan Awami Tehrik’s Inqilab March have laid siege to the parliament as the party chief Dr Tahirul Qadri asked his supporters not to allow a single parliamentarian and even Nawaz Sharif into the parliament.

Dr Tahirul Qadri warned the government to fulfill their demands as he said the protesters were very tired and they are afraid they may become violent.

Mr Qadri added that even a single person of the government authorities did not come to him for talks and that the government’s statements about talks were wrong.

On the other hand, the Azadi March of the Pakistan Tehrik-e-Insaf also started a sit-in outside the parliament. PTI leader Mr Shah Mehmood Qureshi says they are not willing for talks but that Mr Nawaz Sharif must resign as prime minister.

Meanwhile, the National Assembly has reposed confidence in the Prime Minister, Mr  Nawaz Sharif and asked him not to resign from his office on the demands of PTI and PAT.

The prime minister, who reached the parliament building surrounded by workers of PAT, was greeted with support from members of the treasury as well as the opposition benches.

The lawmakers asked the prime minister to announce that he would not resign from his office.