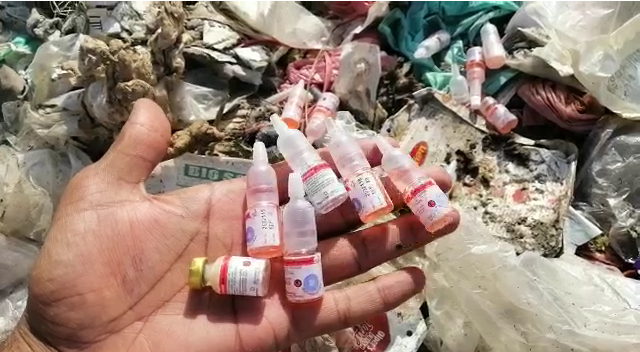 CHARSADDA: An inquiry has been ordered after polio vaccine was found in garbage dump in Prang area of Charsadda on Tuesday.

District Health Officer (DHO) Dr Fayaz Ali has confirmed that vaccine was found in garbage dump near a graveyard in Prang area. He has formed a two-member committee comprising Dr Fazle Rabi and Dr Feroz Shah to conduct an inquiry into the matter and submit report within 24 hours.

A storekeeper of the Health Department has also been suspended over negligence in preserving the vaccine.

The fresh issue has surfaced after hundreds of children were affected after being administered polio drops two days ago and a panic situation was created in some parts of KP, particularly in Peshawar. Hundreds of children were brought to hospitals by parents complaining that their children are vomiting after consuming polio vaccine. Announcements were also made in the mosques ‘advising’ the people to take their children, who have consumed polio drops, immediately to hospitals. Although no death was reported from any part of the province, but a lot of such rumours spread on the social media and many parents refused to give polio drops to their children fearing that it might affect their health.

After the press conference, a man was arrested in Peshawar who made a video and asked the schoolchildren to pretend that they are unconscious after consuming polio drops.