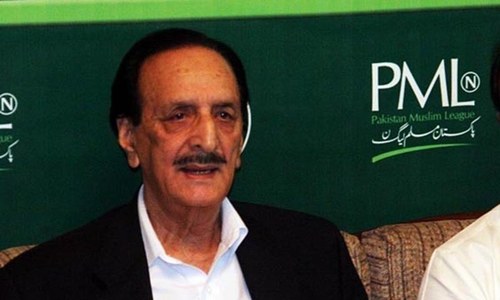 PESHAWAR, 28 November: Contrary to the high court’s orders, the inquiry report of the Raja Zafarul Haq committee on the issue of amendment in the affidavit of Khatm-e-Nabuwwat has come to surface.

According to Dawn newspaper, the inquiry report has recommended action against those responsible for changes in the affidavit of Khatm-e-Nabuwwat. Besides Senator Zafarul Haq, Interior Minister Ahsan Iqbal and Mushahidullah Khan were part of the committee.

The Islamabad High Court (IHC) had earlier asked the Secretary Interior Ministry to present the inquiry report in the court and directed him to make sure that the report is not made public before it is presented in the court.

According to the report, the probe committee scrutinised original draft of the bill, amendments in the proposed bill and speeches on the bill in the Senate and said in their report that no suggestion in the affidavit was made in the meetings of the Senate Standing Committee on Law and Justice. The report said Senator Hamdullah raised objection to change in wording of Khatm-e-Nabuwwat affidavit in the Senate and had demanded its restoration in original form. All the PML-N members supported Hamdullah on this issue and all the National Assembly members became aware of the mistake when the bill landed there. Despite strong resentment of opposition over the bill of making a disqualified person the party president, the NA members passed the bill about Khatm-e-Nabuwwat which became a law after the president’s signature.

The report said a responsible federal minister has accepted that it was his duty to check whether any mistake was there in the draft. However, he failed to fulfil his responsibility despite expertise in law and vast experience. This report has not been presented in any office so far.