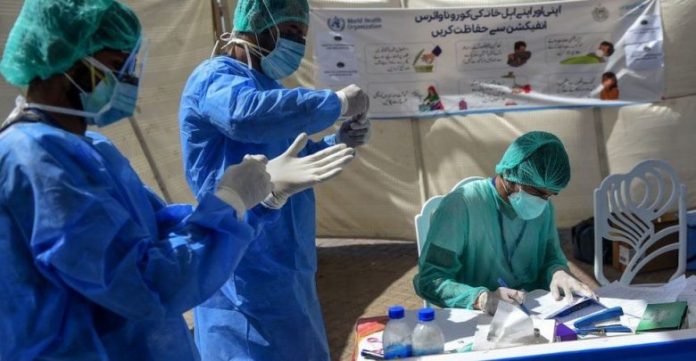 SHANGLA: The doctors of Shangla have sought help from pharmaceutical companies due to shortage of safety equipment with the government hospitals.

It was very difficult to fight coronavirus pandemic for doctors and other health staff without protective kits and other necessary safety equipment. The doctors and paramedical staff of Bisham Hospital instead of stopping work, decided to arrange the equipment for themselves from private companies.

With so many deaths from coronavirus around the world, the governments in different countries, including Pakistan, realised shortcomings in their healthcare system. The Pakistan government has taken various steps according to its capacity to provide necessary equipment to government hospitals, but that equipment has not reached many hospitals situated in the far off areas.

Doctors in some parts of the country started protest over lack of safety equipment, but still the grievances of doctors were not addressed. A doctor in Swabi checked the patients while wearing a plastic shopping bag to protest lack of safety equipment, who was sent a notice by the Health Department, but that notice was withdrawn upon the intervention of the health minister.

The hospital in Bisham was also confronted with problem of lack of safety equipment due to which the health staff was at risk of contracting the virus from patients. Upon the requested of doctors, the local pharmaceutical companies provided them equipment like kits, gloves and masks as a gift.

Deputy Medical Superintendent Tehsil Headquarters Hospital Bisham Dr Sanaullah said six staff members remain on duty for coronavirus patients round the clock. He said the duties are performed in three shifts and the staff needs about 18 to 20 kits on daily basis, but the equipment provided by the government was quite insufficient.

Member National Assembly from Shangla Dr Ibad also provided some equipment to the hospital on behalf of his party, PML-N. Dr Sanaullah said protective kits are mandatory for doctors to keep them safe from the virus. He said the doctors contacted the pharmaceutical companies and requested them that they often provide gifts to doctors, and at this time, there can be no better gift than the protective equipment. He said the doctors received positive response from the pharmaceutical companies.