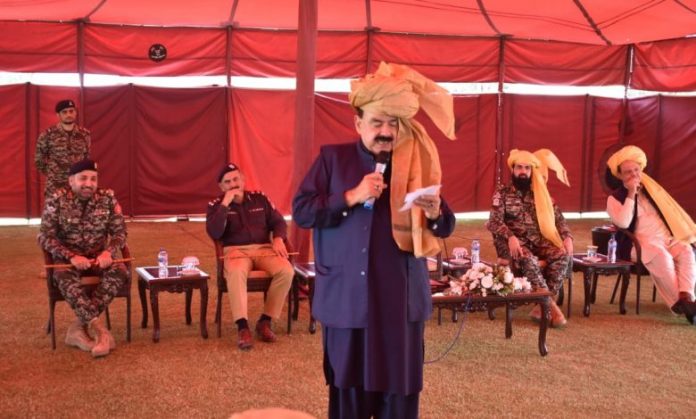 The minister attended a Jirga with elders of Ahmedzai Wazir, Dotani and Sulemankhel tribes at Scouts Camp in Wana, the main town of South Waziristan, which was also attended by officials of the Pakistan Army. He said our brave armed forces offered supreme sacrifices for restoration of durable peace and regional development. He said the entire nation holds sacrifices of the security forces in high esteem.

Shaikh Rashid also lauded the sacrifices of tribal people and thanked them for their whole-hearted and consistent support to the armed forces of Pakistan for restoration of durable peace and development in the area. He said the people of merged districts are patriotic and the entire nation is proud on them. He said the tribesmen are the leaders of a brave, dynamic and highly respectable nation and their role in elimination of the enemy of Pakistan is highly praiseworthy.

Sheikh Rashid said government has fulfilled the long awaited demand of people of merged districts and provided internet service to people of South Waziristan that would help provide quick information to them in a single click.

The minister said immigration process for movement on Pak-Afghan border would be simplified. He said government accords highest priority to the swift development of the less developed areas and more funds would be provided for development of South Waziristan. He said the government would provide more resources to bring less developed areas at par with developed parts of Pakistan. He said the positive effects of merger of erstwhile Fata with KP would soon become visible and pace on all socio-economic uplift projects would be expedited in merged tribal districts.

On this occasion, the tribal elders presented traditional turban to the interior minister.

The elders of South Waziristan appraised Sheikh Rashid about various regional problems and suggested solutions for it.