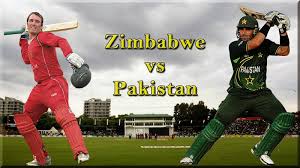 PESHAWAR, 22 May: After a pause of six years, international cricket has revived in Pakistan as Zimbabwe played first match of the 2-match T20 series in Lahore against Pakistan today.

Thousands of spectators turned up at the Lahore’s Qaddafi Stadium to see that match. A number of mega television screens were installed in the stadium. Strict security arrangements were made to avoid any untoward situation. Thousands of security personnel were deployed in and outside the ground to ensure fail-safe security besides a constant surveillance by helicopters.

“It is very welcoming that international cricket revived in Pakistan and we wish that the Zimbabwe cricket team go back with good memories. This will help encourage other countries to send their teams to Pakistan. We pray for the successful completion to this tour and we’ll see all the matches,” said a spectator. Another viewer said: “It is heartening that international cricket restarted in Pakistan after a long gap of six years.”