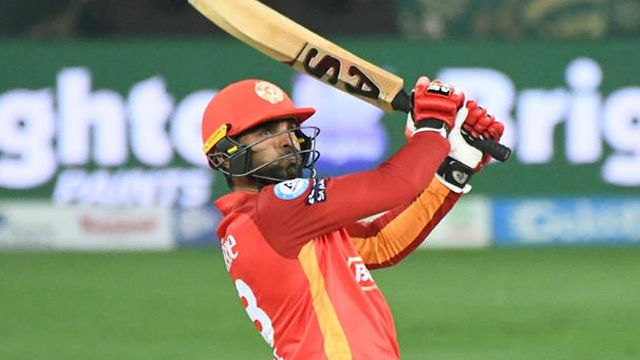 PESHAWAR: Islamabad United defeated Karachi Kings in a match of the Pakistan Super League (PSL) by five wickets in Dubai on Wednesday.

Kings after being put into bat scored 168 runs for the loss of eight wickets. Babar Azam scored 68 and Livingstone scored 56 and laid a solid foundation, but Kings failed to accelerate in the final overs and lost too many wickets.

Rumman Raees was the pick of bowlers for United who took three wickets, while Amad Butt, Faheem Ashraf and Shadab Khan took one wicket each.

Islamabad United surpassed the target in the final over with five wickets to spare. Asif Ali top scored with 70 runs, while Salt scored 46.

Asif Ali was declared player of the match for his explosive inning.

In the earlier match of the day, Lahore Qalandars defeated Quetta Gladiators in a one-sided contest by eight wickets.

Qalandars after winning the toss decided to bowl first and bundled out Gladiators for 106 runs in the 20th over.

Ahsan Ali was top scorer with 33 runs, while captain Sarfraz Ahmed scored 29. None of other batsmen for Gladiators could score considerably and they fell for a paltry total.

Lamichhane was the pick of blowers for Qalandars who took four wickets by conceding just 10 runs in four overs. Haris Rauf took two wickets, while Shaheen Shah Afridi and Yasir Shah took one wicket each.

It was an easy target for Qalandars and they surpassed the total in 17th over with eight wickets to spare. Captain AB de Villiers was top scorer with 47 runs, while Haris Sohail scored 33.

Lamichhane was declared player of the match for his brilliant bowling.

Two matches will be played in the PSL-4 today (Thursday). In the first match, Multan Sultans will face Peshawar Zalmi at 4:30pm (PST), while in second match, Lahore Qalandars will face Karachi Kings at 9:00pm (PST).