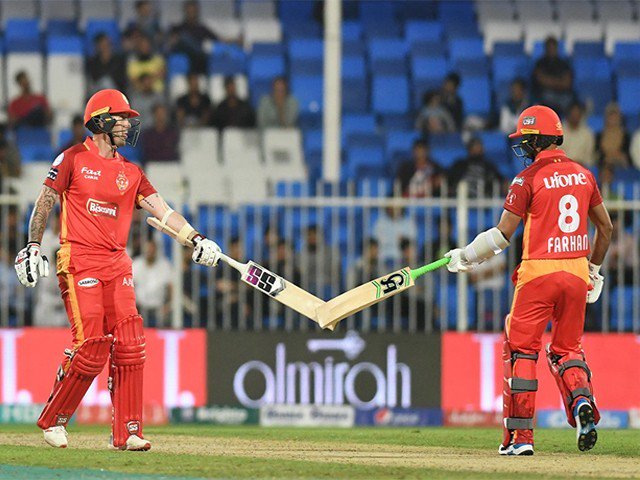 PESHAWAR: The journey of Karachi Kings in the fourth edition of the Pakistan Super League (PSL) came to an end on Thursday as Islamabad United defeated them by four wickets after a sensational contest.

Karachi Kings decided to bat first after winning the toss and posted 161 runs for the loss of nine wickets. Babar Azam was again the pick of batsmen for Kings with 42 runs, while Munro scored 32. The middle and lower order batsmen couldn’t contribute much.

For United, Muhammad Musa got three wickets, Faheem Ashraf got two wickets, while Rumman Raees and Shadab Khan got one wicket each.

Islamabad United surpassed the target in the last over with four wickets to spare. Alex Hales, who was playing his first match in the PSL-4, scored 41 runs, while Delport scored 38. Hussain Talat also contributed 32, while Asif Ali scored a quick 24 to take United to the second eliminator.

For Kings, Umer Khan and Aamer Yamin took two wickets each, while Mohammad Amir and Usman Shinwari took one wicket each.

Alex Hales was declared player of the match for his brilliant batting.

Prime Minister Imran Khan on Thursday announced that all future matches of the Pakistan Premier League will be played in Pakistan.

During the opening ceremony for new visa regime for 175 countries to promote tourism and investments in Pakistan, the prime minister said there are no security issues in Pakistan now. He said the country is in a better position for trade and investment and visit of foreign dignitaries.

Imran Khan said the foreign visitors after coming to Pakistan see through their eyes the potential of Pakistan.

The first edition of the PSL was played totally in the United Arab Emirates. The final of the second PSL was played in Lahore, while in the third PSL three matches were played in Pakistan, two in Lahore and one in Karachi. In the fourth edition, eight matches are being played at the National Cricket Stadium, Karachi. Three matches were to be played in Lahore, but that were shifted to Karachi due to tension with India.