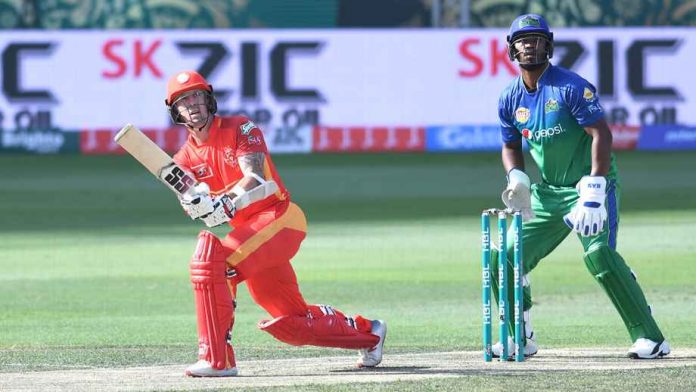 PESHAWAR: Islamabad United defeated Karachi Kings in a one-sided match by seven wickets in the Pakistan Super League at Sharjah on Saturday.

Islamabad United won the toss and invited Kings to bat first. Kings were restricted to 143 for the loss of six wickets due to disciplined bowling of Islamabad. Although Babar Azam got good start with his 27, but he didn’t get support from the other end and it was the lower order which gave some respectability to the total with Dunk scoring 49 and Aamer Yamin scoring a cameo of 35.

It was a smooth sailing for United in the chase and they surpassed the target with ease in the 17th over with seven wickets to spare.

Karachi captain Imad Wasim took two wickets, while the rest of bowlers could not strike.

Ronchi was declared player of the match.

With Saturday’s victory, Islamabad have consolidated their second position on the points table with six points. Quetta Gladiators are on top with eight points, Peshawar Zalmi and Lahore Qalandars have four points each, while Karachi Kings and Multan Sultans have two points each.

After being asked to bat, Qalandars scored 143 runs for the loss of seven wickets. Captain AB de Villiers was top scorer with 45, while Sohail Akhtar scored 29.

Gladiators surpassed the target on the last ball of the inning with captain Sarfraz Ahmed hitting the last ball for a six. The captain scored 52, while Ahsan Ali scored 40. Haris Rauf took two wickets, while Yasir Shah, Rahat Ali, Wiese and Lamichhane took one wicket each.

Sarfraz was declared player of the match.