People from Ismaili community celebrate this festival in the first week of February in the memory of Pir Nasir Khusro. They believe that Pir Nasir Khusro came to Garam Chashma 1,100 years ago through the route of Badakhshan and their forefathers accepted the religion due to his preaching.

People of the area visit each other’s homes like Eid festival and offer traditional foods to guests. On the night before the festival day, the Ismaili community people throw flour in all the corners of their houses which they believe will bring fortune and cleanliness. 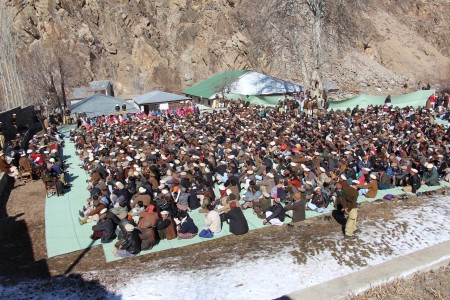 A local person told TNN about the festival that the people of Ismaili community clean their houses and make cheese bread and also send it to the neighbours to celebrate the event.

Another elder said the event is being observed for the lost one thousand years. “We will keep this tradition alive for ever,” he said.

During this year’s festival, stalls of books and precious stones have also been installed.

Aasia Karim, who arranged the book fair, told TNN that the purpose of the event was to promote the habit of book reading.

“People usually focus on media coverage and don’t pay much attention to book reading. The purpose of my effort is to promote the habit of book reading,” she said.