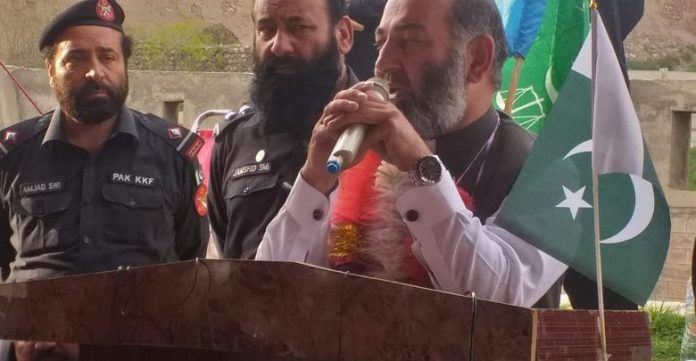 JAMRUD: The Provincial Chief of Jamaat Islami (JI), Senator Mushtaq Ahmad Khan while addressing the protest camp of Khasadar and Levies forces assured full support for their protest campaign to secure their rights.

Talking about the demands of both the tribal forces are legal and asked the government to address it at once. He was addressing the protests in Tehsil Jamrud, Khyber Tribal district where the Khasadar and Levies forces have set up a protest camp, near the Bab-e-Khyber for the last couple of days.

The JI Provincial leader said that after the passage of the 25th constitutional amendment, now the chief minister of the province has the authority to accept all the demands for the tribal forces through a single executive order.

Mushtaq Ahmad Khan assured the protesting personnel that the Jamaat Islami will always be standing on the Khasadar and Levies forces and will raise voice for their legal demands on every form. He also assured the protesting personnel of tribal districts that if there is a need for legal battle, the Jamaat-e-Islami is ready to bear all its charges. He said that he will rise vice for their rightful demands of the floor of Senate and will arrange their meeting with Chairman Senate.

He assured the Khasadars and Levies men that he will also send letters to the Prime Minister and the president of the country and will request them to address all the issues of the protesting personnel in an amicable manner.

The Khasadar and Levies personnel have presented a 22-point charter of demands to the government. The Levies and Khasadar personnel in several tribal districts boycotted duty during the anti-polio campaign. They vowed to continue the boycott until acceptance of their demands. The Levies and Khasadar personnel in the merged districts in a meeting of the core committee of both the forces in all merged district anonymously announced to boycott security duty during the anti-polio drive.