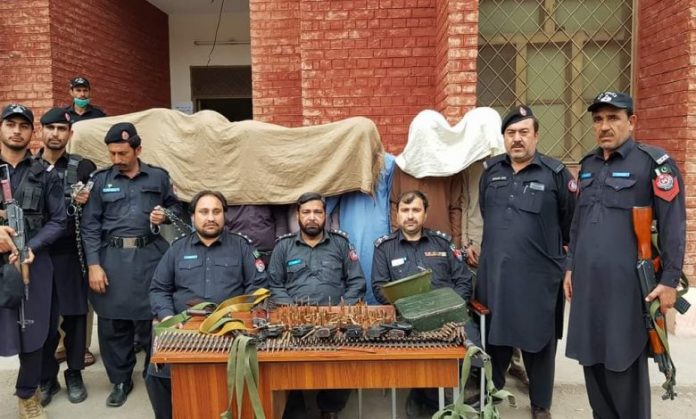 JAMRUD: Police in Khyber tribal district have arrested 12 people from two rival groups involved in firing on each other over a land dispute in Ghundao area of Jamrud tehsil.

The police team supervised by District Police Officer (DPO) Waseem Riaz also demolished all the bunkers of the armed men from rival tribes.

According to a statement issued from the DPO office, exchange of fire was continuing between two rival groups in Ghundao area on Friday. Station House Officer (SHO) Jamrud reached the spot along with a heavy contingent of police. The situation turned ugly when the clashing groups opened fire on police party due to which Additional SHO Jamrud Saifullah sustained injuries.

The statement said a large number of policemen encircled the entire area, arrested 12 accused, and shifted them to Jamrud Police Station. Cases have been filed against the arrested armed men and raids are continuing for arrest of other accused.

DPO Waseem Riaz said maintaining law and order in the area is the responsibility of police. He said no one would be allowed to take law into own hands. He said miscreants will be dealt according to law and they would be awarded strict punishment.

After merger of erstwhile Fata with Khyber Pakhtunkhwa, land disputes have intensified and several people have lost their lives in clashes on such disputes recently.

On Thursday, clashes erupted over land dispute in South Waziristan and Bajaur over which the local people expressed grave concerns.

On Thursday, clashes resumed between Dotani and Zalikhel tribes of South Waziristan in which at least two persons lost their lives and three others were injured. Both sub-tribes of Ahmadzai Wazir tribes are at war and clashing for the last one month in which several persons from both sides have been killed and injured.

On February 20, six people reportedly died and several others are injured in clashes between the two tribes.

Meanwhile, Miangan and Shamozai tribes in Utmankhel area of Bajaur clashed over ownership of a mountain. The firing continued between the two tribes for several hours in which some houses were damaged. A huge contingent of police reached the spot and started negotiations with the clashing tribes. During talks, both tribes agreed on ceasefire for six months.