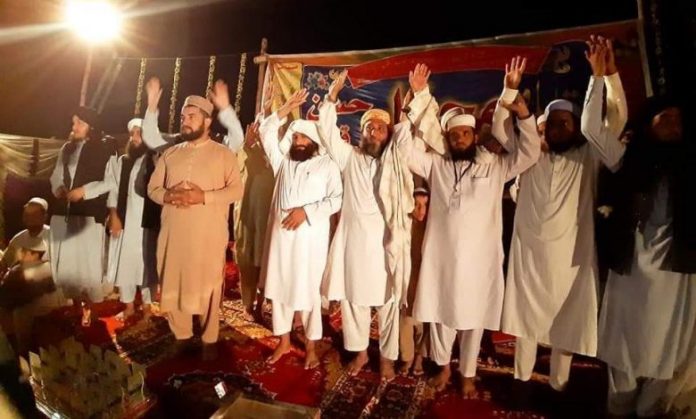 JAMRUD: The Ulema of three schools of thought in Jamrud tehsil of Khyber tribal district have unanimously announced to boycott Nikah at those marriage ceremonies where music functions are arranged.

Local sources said the announcement was made at Mehfil-e-Qirat in Ghundi area of Jamrud on Saturday. The gathering was attended by Ulema from Deobandi, Barelvi and Tauheed Ashaat wal Sunnah schools of thought. The Ulema decided unanimously that they will not administer Nikah of any bride or groom if their marriage program contains music functions or programs of transgender persons.

A person who attended the Ulema’s meeting said religious scholars from three schools of thought have unanimously decided to boycott marriages of those who carry out any action at marriage which is against Shariah. The Ulema have appealed to the people to arrange functions for recitation of the Holy Quran and Hamd during marriage functions.

A ban on music functions by transgender persons in Jamrud was also imposed in March last year. However, that ban was imposed by the district administration.

The administration at that time had said that anyone who violated the ban during their wedding or other functions will have to pay a fine of Rs100,000.

According to TNN correspondent, a letter was also issued by the then tehsildar in this regard. The letter warned that violators of the ban will face Rs100,000 fine and imprisonment as well. The letter said the music and dance programmes of transgender persons are not good for the youth of the area.

The letter had also warned people against celebratory firing during the wedding functions. It said there was complete ban on aerial firing as it endangers lives of innocent people.

The local people had welcomed the reminder on aerial firing, but expressed reservations on the decision to ban the music programmes. They said banning transgender persons from earning their livelihood tantamount to their economic murder. They said this step of the administration is illegal.

Social circles are of the view that people must have the choice either to invite transgender persons at music functions or do it without them. However, banning them from earning their livelihood is cruel and unjust.