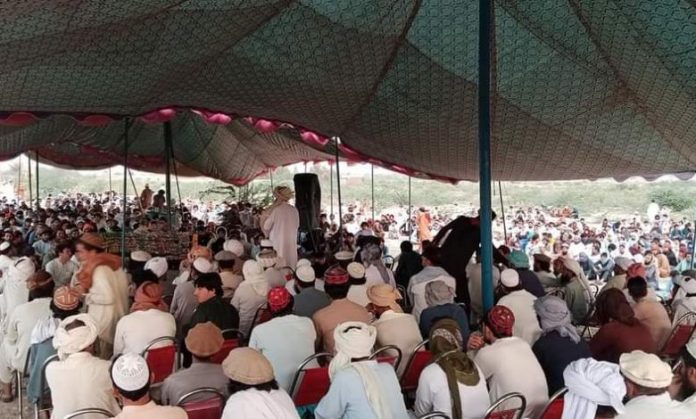 BANNU: The people of Janikhel in Bannu are continuing sit-in against the target killing of a member of the negotiations committee and now they have announced a long march towards Islamabad from June 10.

Social activist, Said Wazir, who is also attending the sit-in, said two persons from the area were shot dead by unidentified miscreants during the last two weeks of last month. He said the slain people include a boy, Munib, and a negotiations committee member Malik Naseeb Khan. He said the bad law and order situation despite agreements with the government is a cause of grave concern.

Said Wazir said Chief Minister Mahmood Khan and security forces officers had made an agreement with Janikhel tribe after mutilated bodies of four youth from the tribe were found in March and the tribesmen started a long march towards Islamabad. However, he said, the law and order challenges still persist despite that agreement. He said the Jirga members had handed over a list of 73 missing people to the government, but only five of them have been recovered so far. He said if the culprits involved in fresh killings were not arrested forthwith, the Janikhel tribesmen would launch a long march towards the Banigala residence of Prime Minister Imran Khan from June 10.

In March, four boys from Janikhel tribe aged between 13 to 17 years went missing and later on their mutilated bodies were recovered. The boys had no enmity with anyone and the killers remained anonymous. Janikhel tribesmen staged a sit-in against the incident which ended after nine days after talks with different government teams.

Under the agreement, it was decided that the government would act against all armed groups in the area, innocent arrested people will be released, Shaheed Package will be given to families of for slain boys, culprits behind the killings will be arrested and steps will be taken to stop such incidents in future.

Earlier, Kamran Bangash had claimed that the agreement with Janikhel tribesmen will be implemented in three months.