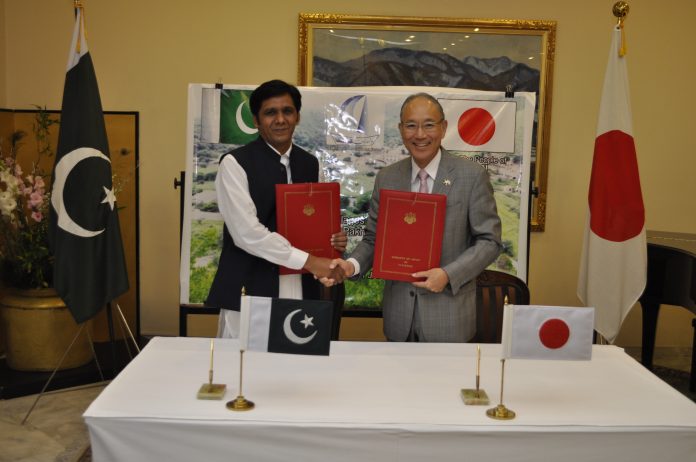 PESHAWAR: The Government of Japan has decided to provide financial assistance of $60,613 for a street pavement project in Union Council Beer IN Haripur district of Khyber Pakhtunkhwa. The grant will be provided to Badban Enterprises Development Forum- a local non-government organization (NGO) in Haripur district.

Agreement for the project was signed on Wednesday between Ambassador of Japan to Pakistan Kuninori Matsuda and head of the recipient organization at the residence of the ambassador of Japan in Islamabad, says a press release.

The grant of $60,613 to BEDF will be utilized for the pavement of streets, along with construction of drains, in six different villages of Beer Union Council. At present, due to broken or unpaved streets, mobility of local residents, particularly during rainy days, is extremely difficult. It is expected that the project will benefit 11,685 individuals of the six villages with better streets infrastructure.

While addressing in the ceremony, Ambassador Kuninori Matsuda congratulated the recipient organization for winning the Japanese grant for their development project. He expressed hope that the projects will help in ensuring easy mobility to local residents, especially women, children and elderly people of six villages.

The Government of Japan will continue to support the people of Pakistan to improve their living standard and this project will contribute to strengthen decades-long friendly relationship between the people of Japan and Pakistan, Mr Matsuda said.

Meanwhile, Consul General of Japan Toshikazu Isomura said two to three more Japanese companies will also arrive in Pakistan to start their business units. He said it was his desire to strengthen and further improve trade and investment relations with Pakistan and they were trying their best in this regard.

Speaking at a meeting of Karachi Chamber of Commerce & Industry(KCCI), he said that Pakistan and Afghanistan together represent a huge market with a population of around 250 million which could offer a lot of trade and investment opportunities to the Japanese business community looking forward to expand businesses in this important region.