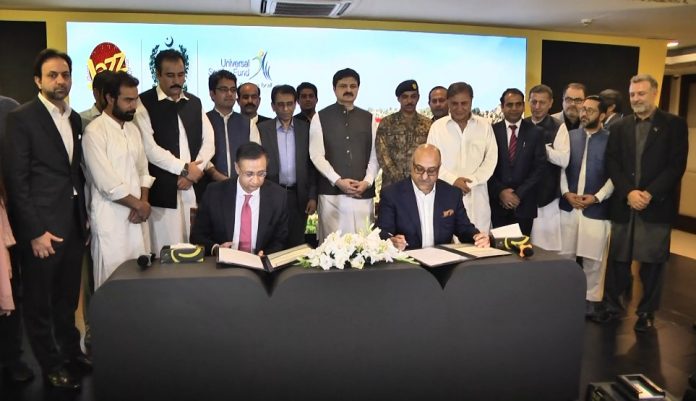 Under the agreement, broadband service will be launched in South Waziristan tribal district. The agreement was signed by USF CEO Harris Mahmood and Chief Cooperative and Enterprise Officer Jazz Company Ali Naseer at a local hotel in Peshawar. Federal Minister for IT Khalid Maqbool Siddiqui and spokesman of the provincial government Ajmal Wazir also attended the ceremony.

Speaking at the ceremony of Federal Minister for IT Khalid Maqbool Siddiqui said that the world has become Goble Village and we have to change ourselves accordingly. He said that a change is a promise of the present government and another change is coming from outside very fast. Siddiqui added that Broadband internet is very important for construction and development in the present era. “Providing cellular access and digital facilities to South Waziristan will connect it to the world,” the Minister expressed.

Speaking on the occasion, spokesman of the KP government Ajmal Wazir said that it is a historic agreement that will bring a huge change in the tribal district. Wazir claimed that Prime Minister Imran Khan is taking special interest in the development of tribal districts.

The tribal districts of the province have a long-standing demand that the tribal belt should be connected to modern communication infrastructure. Ajmal Wazir said that the Pak army has made huge sacrifices for peace and stability of the tribal belt. He said that the provincial government would cooperate fully with these institutions and this journey of development will continue.

He said that according to the instructions of Prime Minister Imran Khan, we are taking steps to promote tourism in tribal districts. He said that work has been initiated on various projects to fulfil the promises of PM Imran and Chief Minister Mahmood Khan. “Providing Internet access to the people in South Waziristan has long been a demand of local tribes, which is now becoming a reality,” expressed the advisor to CM.