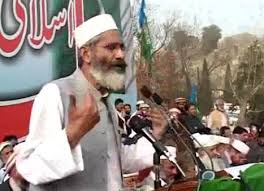 LOWER DIR, 16 September: The Jamaat-e-Islami (JI) has announced to stage a sit-in in front of the National Database and Registration Authority (NADRA) headquarters in Islamabad to protest against blockage of tens of thousands of computerised national identity cards (CNICs) of Pakistani citizens.

The JI ameer Sirajul Haq said while addressing the opening ceremony of a madrassa in Samarbagh, Lower Dir, that CNICs of 1.8 million people have been blocked throughout the country, out of which 38 percent cases belong to Peshawar. He called upon the government to issue new CNICs to the people without further delay. He said NADRA was showing lethargy in verification of the CNICs due to which the people are facing a difficult situation.

The JI chief warned that the party activists with besiege the NADRA headquarters in Islamabad if the verification process of identity cards was not completed by 1 October.