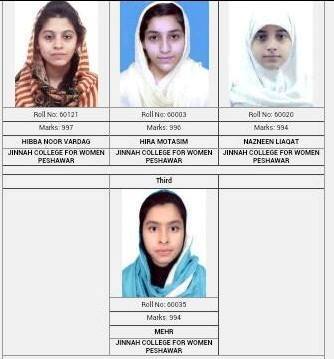 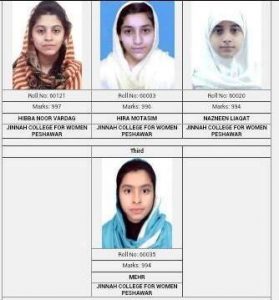 PESHAWAR, July 24: The Jinnah College for Women has clinched the top three positions in the intermediate (FA/F.Sc) examinations under the Board of Intermediate and Secondary Education (BISE), Peshawar.

According to the results, 94,000 students appeared in the exams and 59,000 of them were successful.

Ms Hiba Noor Wardag of the Jinnah College secured 997 marks and topped the board, Ms Hira Mutasam clinched second position by getting 996 marks and Ms Mehr and Ms Nazneen stood third with 994 marks.

FOUR OFFICIALS SUSPENDED: Meanwhile, the Elementary and Secondary Education Department has suspended controller of examination and three other officers of the Peshawar board over the missing of examination records.

Some award lists having marks obtained by students in some subjects were leaked prior to the result declaration. A three-member committee has also been formed to probe the matter and report to the board.