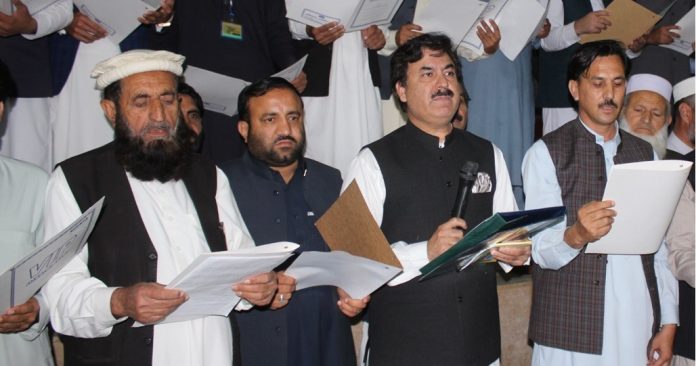 KHAR: Khyber Pakhtunkhwa Information Minister Shaukat Yousafzai on Tuesday held a meeting with the tribal elders during his visit to Bajaur tribal district.

During the meeting, the tribal elders thanked the government for getting them rid of the black law of Frontier Crimes Regulation (FCR). They assured that they will support the provincial government for its endeavours for reforms in the tribal districts.

The provincial minister assured that the Jirga system will be further strengthened. He paid tributes to the people of the tribal districts for their sacrifices for bringing peace to the region. He said the KP government is committed to address the sense of deprivation of the area people. He said the government will specially focus on health and infrastructure development schemes in the tribal districts.

Speaking on the occasion, the provincial minister assured that the journalists of the tribal districts will be provided all facilities which are enjoyed by the media persons of the rest of the country. He said the journalists of Bajaur will get accreditation cards and Sehat Insaf Card as well for their free medical treatment.

He said annual grant will be provided to Bajaur Press Club while its old building will also be restored.

Earlier, the newly elected office-holders informed Shaukat Yousfzai about problems faced by journalist community in the region. The minister praised the efforts of the local media persons for highlighting people’s problems and working for their rights. He said all the genuine demands of the journalist community will be accepted.