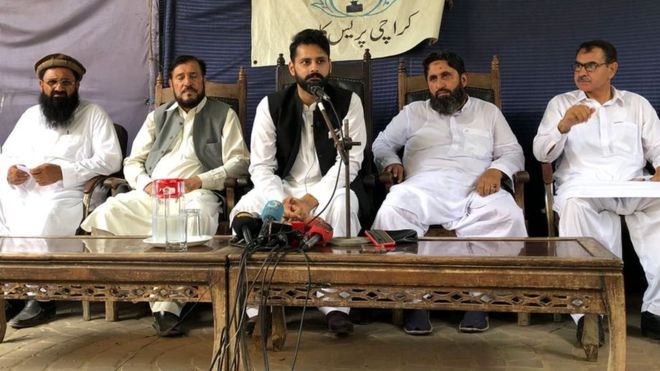 PESHAWAR: The elders of the Jirga formed after murder of Naqeebullah Mehsud in a fake encounter in Karachi have warned the Sindh government against providing facilities and protocol to Rao Anwar.

Former Malir SSP Rao Anwar allegedly headed the police team which killed Naqeebullah Mehsud from South Waziristan in a fake encounter in Karachi on 13 January. A probe team later concluded that Naqeebullah was not a terrorist. Rao Anwar was arrested after Naqeebullah’s murder, but an anti-terrorism court approved his bail application few days ago.

The Jirga members said they will call a Grand Jirga on 27 August and stage a massive protest if Rao Anwar was given facilities and protocol.

Mehmood Mehsud, a member of the Jirga, said Rao Anwar was acquitted in fake encounter and weapons cases. He said appeals have been filed in both cases against his acquittal. He said an application has also been field to change the judge hearing the case in the Sindh High Court which will be heard on 20 August.

Jibran Nasir, a social activist, said at the Jirga that all the cases in which Rao Anwar is involved must be investigated afresh. He assured that the Jirga will never take law into own hands or damage public property. However, he said the Jirga members will not compromise on their demands based on principles. He said the movement initiated by the Jirga will end only after the family of Naqeebullah and other victims are provided justice.