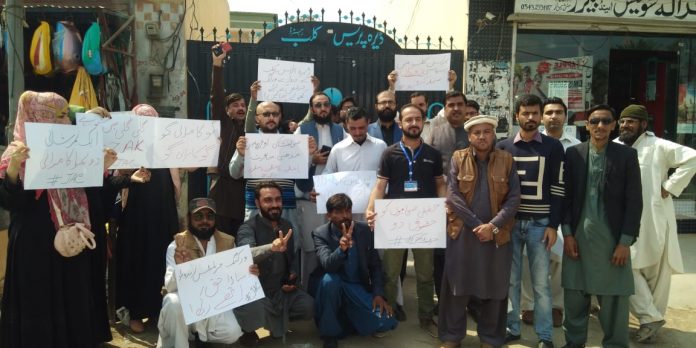 DI KHAN: The action committee of working journalists in Dera Ismail Khan on Friday continued protest in front of the press club building against non-acceptance of their demands.

The protest by local journalists against the press club administration is continuing for the last four months. Every Friday, about 35 protesters gather outside the press club and chant slogans in favour of their demands. They are also boycotting all the activities at the press club.

The protesters said their agitation will continue till lifting of ban on the entry of journalists and granting them full membership. They also demanded the government authorities to stay neutral and don’t take sides with any group of journalists.

The action committee members said the protest will not end until the last five years audit of the press club affairs. They said that some vested interests were protecting the existing leadership of DI Khan Press Club to hide their own inefficiencies.

The protest by working journalists lost momentum recently after the press club administration announced a team for holding talks with the action committee. However, various issues between the two groups remained unresolved and now the protest has again gathered pace. The number of protesting journalists has also increased. Now the protesting media persons have made it clear that they will not end protest till resolution of the audit and membership issue.