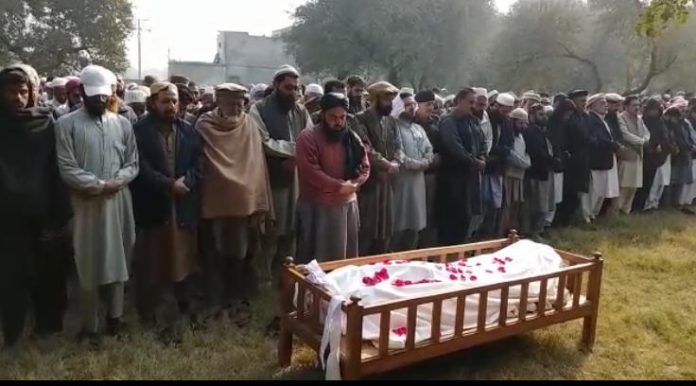 NOWSHERA: Media persons in Nowshera on Tuesday staged protest against the murder of journalist Noorul Hassan in Peshawar.

Noorul Hassan, a journalist hailing from Nowshera, was shot dead by unknown armed men on the Ring Road in Peshawar on Monday night. A cameraman, Sabir was also critically injured in the firing and he is under treatment at Lady Reading Hospital in Peshawar.

The funeral of the slain journalist was held in Shedo area of Jehangira in Nowshera on Tuesday. A large number of people, including journalists and area elders attended the funeral.

After the funeral, journalists who had come from different parts of Khyber Pakhtunkhwa, staged protest against the target killing of Noorul Hassan. The protesting journalists also staged a sit-in at the GT Road. They condemned the murder of the journalist and expressed disappointment over the government’s silence over the issue. They demanded the government to arrest the killers forthwith and threatened to widen the range of protests if the killers were not arrested.

The protesting journalists, who gathered outside the press club, demanded the government to provide security to media persons and arrest the culprits involved in the Peshawar firing incident without delay.