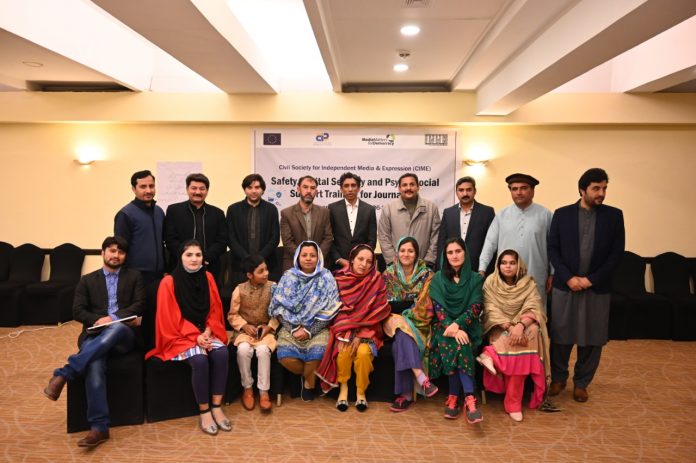 The training workshop was attended by male and female journalists from various districts of KP including the newly merged tribal districts, says a press release.

The workshop consisted of various activities in order to benefit the media workers and journalists. It was, further, elaborated that 1,387 journalists have been killed all over the world since 1992, out of which 61 belong to Pakistan, including editor PPI Islamabad Malik Muhammad Ismail Khan, Wali Khan Babar and others. Article 19 of the Constitution of Pakistan provides freedom of expression to all citizens within the ambit of law. Similarly, according to Article 19-A of the Constitution of Pakistan, access to information is a fundamental right of every citizen, based on this, effective Right to Information laws have been enacted in the federal and the three provinces. While Balochistan Freedom of Access to Information Act (FOI Act 2005) is outdated and inconsistent with the contemporary democratic norms and principles. It is the need of the hour to repeal this law and replace it with more robust and citizens’ friendly right of access to information law on the same pattern as enacted in other three provinces and the center. By utilising this law, journalists will be able to access the required information easily and deliver news based on objectivity.

Media organisations and newspapers, with limited resources, cannot provide adequate protection training and security to journalists and freelancers. The protection and impunity in crimes against journalists need the immediate attention of the government.

Immediate and effective legislation is needed to protect journalists to maintain the sanctity of this noble profession. In view of these circumstances, the CPDI launched the project “Civil Society for Independent Media and Expression (CIME)” with the financial support of the European Union in order to ensure freedom of expression within the limits of the constitution and prioritize journalists’ safety training for the purpose. The training duration is three days which will be conducted in all the major cities of the country in phases.

The first training of the series of training was delivered in Islamabad, the second in Lahore while the third one concluded in Peshawar Friday, after awarding certificates of completion to the participants. Seven more training session of the same nature will be held in the year 2021. Participants of the training said that such training sessions will prove helpful in better legislation for journalists’ safety and networking among them. Organizing such training sessions for young journalists not only enhances their professional skills but also helps them to cope with unsafe and stressful situations during the course of duty.

Various groups of journalists commended the efforts of CPDI and the European Union for organizing such training sessions and called on the journalists’ organizations to hold similar sessions for young journalists in order to ensure their safety and protection in field.