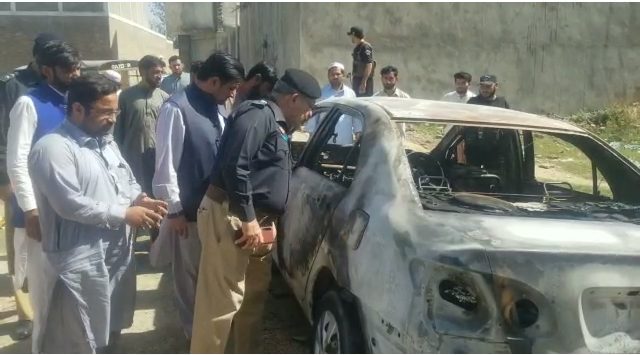 HANGU/SWABI: Three vehicles owned by a senior journalist were set on fire, while a transgender person was shot injured in two separate incidents in Hangu and Swabi on Monday.

In Hangu, unknown miscreants set on fire three vehicles of senior journalist Zahid Misri Khan which were parked outside his home. The Rescue 1122 personnel immediately reached the scene and doused the fire, but all the vehicles were completely damaged.

Police have launched investigation into the incident. However, no arrest has been made. The affected journalist is son of eminent late journalist Misri Khan.

Deputy Commissioner Mansoor Arshid and District Police Officer Shahid Ahmed visited the residence of Zahid Misri Khan and expressed sympathy with him over the incident. They assured him that the culprits involved in the crime will be nabbed soon.

Police have filed a case against unknown miscreants in Hangu City Police Station. DPO Shahid Ahmed said the culprits will not escape the clutches of the law, while the deputy commissioner said all possible help will be extended to journalist community.

Meanwhile in Swabi, police have arrested a person allegedly involved in opening fire at a transgender person in which he was critically injured.

TNN correspondent reported that the pistol used in the crime has also been recovered. Transgender person Rauf Khan alias Malta was having breakfast at the hujra of Taimoor Nawaz in Maneri Payan after attending a music program when the accused, Laquat came there while brandishing a gun and started teasing Malta. When the transgender person resisted, the accused was infuriated and opened fire on him, leaving him critically injured.

Malta was taken to the District Headquarters Hospital Swabi, but doctors referred him to Peshawar due to his serious condition. Malta belongs to Peshawar but lives in Shah Mansoor area in Swabi.

Police formed a team for the arrest of the culprit which accomplished the task within two hours of filing of report.

Sources said the accused during initial interrogation has confessed to his crime. The accused said he was tense due to some domestic issues and came to the hujra and indulged into argument with the transgender person and shot at him as he could not control his anger.