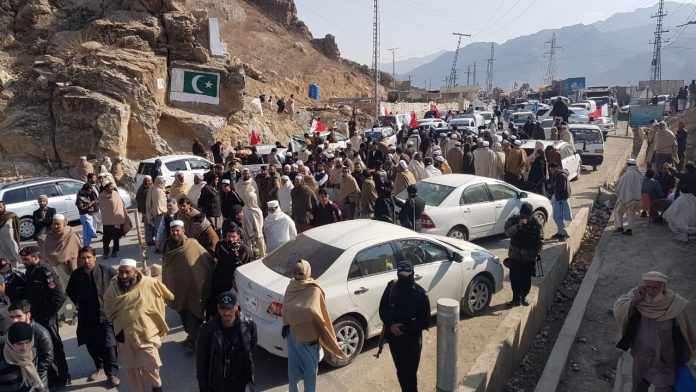 The activists of the religious party gathered in Landikotal Bazaar in large number and then blocked the Pak-Afghan Highway for all kinds of traffic. The commuters and transporters faced difficulties due to blockage of the road. A large number of small and big vehicles were seen stranded on the highway during the protest.

The protesters said there should be no hindrance on the movement of non-custom paid vehicles in the tribal districts within five years of merger of the erstwhile Fata with Khyber Pakhtunkhwa. However, they said such vehicles have been banned in Khyber tribal district which is unjust. They demanded immediate lifting of the ban to ensure free travel of the tribesmen at least within the jurisdiction of the tribal districts.

Two days ago, the administration of Khyber tribal district announced permission for the non-custom paid vehicles to travel inside the tribal districts. A notification in this regard was issued by the deputy commissioner of Khyber district under the decision of the Federal Board of Revenue (FBR).

The notification had said that non-custom paid vehicles will not be allowed to travel beyond the jurisdiction of the tribal districts.

Two children of a family sustained injuries in a landmine blast in North Waziristan tribal district on Thursday.

Local sources said the incident happened near Ghulam Khan. The injured children, identified as Hussain Ahmed and Dilraj are brother and sister. Both the children have been shifted to Combined Military Hospital (CMH) Peshawar through a military helicopter.

On Wednesday, a Frontier Corps (FC) personnel lost his life and another sustained injuries in a landmine blast in Safi tehsil of Mohmand tribal district.

A team of the bomb disposal squad of the FC was hit by a landmine in Gurbaz Bayankhel area in the morning. Sources said the soldiers were clearing landmines from the area when the incident happened. The security forces launched a search operation in the area after the incident.

Several people have lost their lives and many others were injured in landmine blasts in the tribal districts after the return of the displaced persons.