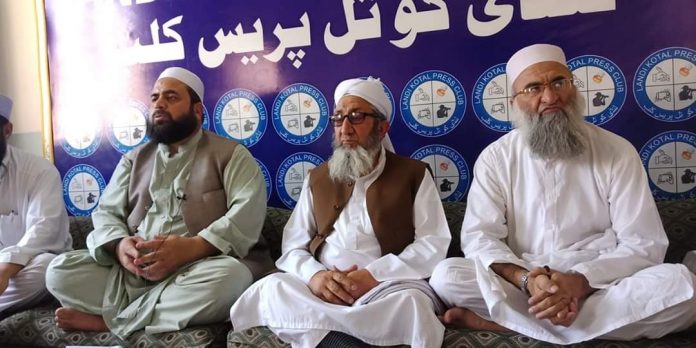 LANDIKOTAL: The local leadership of Jamiat-e-Ulema-e-Islam Fazal (JUI-F) has said that both the provincial and federal governments have failed to implement the promises made with the people of tribal districts at the time of the merger.

The General Secretary of JUI-F for tribal districts Mufti Ijaz Shinwari along with other local leaders were addressing meet the press program at Landi Kotal press club on Thursday. Mr Ijaz said that they are still against the merger of tribal districts with the province and will oppose all the steps taken in this regard, but the JUI-F will participate in the election on 16 seats of the provincial assembly.

He said that the JUI-F leadership will not keep the party away from democratic process and will contest the July 20 election in tribal districts with full zeal and enthusiasm. t

They also condemned the provincial government for a letter to the election commission of Pakistan (ECP) to postpone the elections and declared the act of polls delay as a ‘Shameful act.

Mr Shinwari who is also JUI-F candidate for PK-105 said that the election was postponed as the Pakistan Tehrik-e-Insaf (PTI) government is unable to face the public and ask for a vote as they have failed to run the country and provide solace to poverty-stricken people.

He accused the PTI government of rising prices of daily use commodities that have put further burden on the poor masses. Talking about the introduction of regular courts in tribal districts, Mr Ijaz said that the tribal jirga was far better than courts as it takes a lot of time and money to get access to justice which the poor people of his area cannot afford.

The JUI-F flays the Election Commission of Pakistan allegedly for failure to implement its rules and regulations. Mufti Ijaz also criticized the government for not providing enough and immediate funds for the uplift of tribal districts, where the people are still deprived of their basic needs of life.