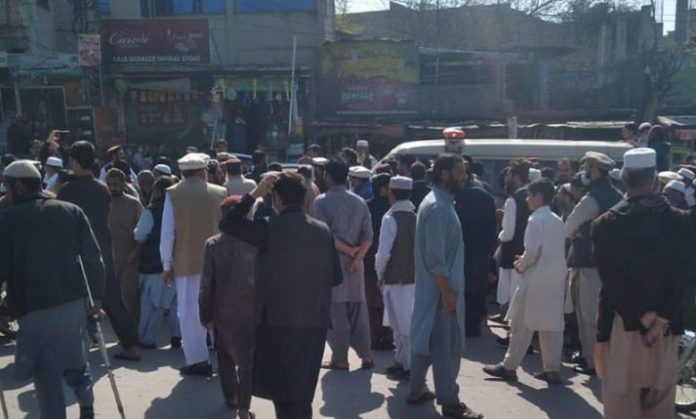 PESHAWAR: The Jamiat Ulema-e-Islam-Fazl (JUI-F) activists on Sunday staged massive protest and sit-in in Bhara Kahu area of Islamabad over the killing of its leader and two other people.

A prayer leader and two children were shot dead in Islamabad’s Bhara Kahu area by unidentified armed men on Saturday. The Imam-e-Masjid (prayer leader) was identified as Mufti Ikram while one of the children killed in the attack was his 13-year-old son and the other one was his student. Mufti Ikram was stated to be an active leader of the JUI-F.

The JUI-F activists and family members of the slain persons staged sit-in and protest at Bara Kahu’s Athal Chowk. The protesters blocked Murree Road for all kinds of traffic that resulted in severe traffic jams and long queues of stranded vehicles. The passengers and transporters faced difficulties due to traffic jams.

The protesters said the murder has taken place in the heart of Islamabad while first information report (FIR) of the incident was not registered. They criticised the government and the administration, saying that they have been failed to protect citizens.

As the protest intensified, Deputy Commissioner Islamabad Muhammad Hamza Shafqat and the Senior Superintendent of Police (Operations) arrived at the protest venue and held talks with the protesters. They assured the protesters that the culprits will be arrested soon. The protesters dispersed peacefully after getting assurances from authorities and took the bodies to ancestral areas for funeral and burial. However, the protesters warned that they would resume agitation if the culprits were not arrested.

Following the end of protest, the traffic flow resumed. The reopening of the road was also announced by the police through mainstream and social media.

The JUI-F leader, his son and another child were shot dead as they were stepping outside the mosque in Bhara Kahu after prayers. They were reportedly shot multiple times. The local people called police after the incident.

No group or individual claimed responsibility for the killings. Police are investigating the murders from different angles as to whether the incident was target killing, terror incident or the outcome of personal enmity. Police say investigation into the killings is underway.