JAMRUD: The leaders and workers of Jamiat-e-Ulema Islam (JUI-F) in Khyber Agency are protesting against the shifting of votes from NA-43 to NA-44 in the district by election commission of Pakistan.

The protestors have set up a camp on Pak-Afghan highway in Ali Masjid area of jamrud and their protest entered the second on Wednesday.

Heading the protestors, Moulana Ghufranullah and JUI-F election candidate from NA-43 Mufti Ijaz Shinwari  said that votes of Ali Masjid, Shagai,, Lala China,Tawda Mila, Chora and other areas have been moved from NA-43 to NA-44 by election commission which they said was injustice with voters of these areas. 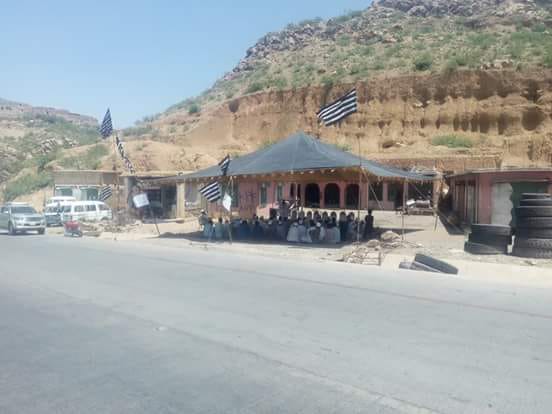 JUI-F workers and leaders protesting against shifting of votes from NA-43 to NA-44 constituency in Khyber Agency. Photo by Izat GulMufti Ijaz said historically and administratively the above mentioned localities were part of Jamrud tehsil but, the election commission transferred votes of these areas to Bara which will be hard to serve by the elected Member of National Assembly from NA-44.

He added that his party would take up the issue with high ups of election commission and ask them to bring back these votes to NA-43 constituency. After thousands of people displaced by conflict and militancy from Bara Khyber Agency, a big number of  voters of the constituency registered themselves in settled areas thus reducing the total votes in Bara constituency.