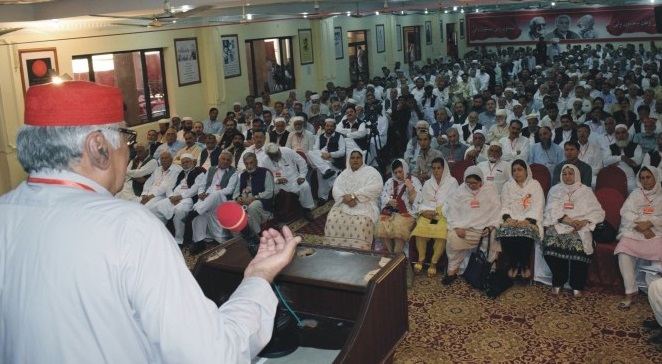 PESHAWAR: Awami National Party’s (ANP) central president Asfandyar Wali Khan on Friday announced support for the ‘Azadi March’ of Jamiat Ulema Islam-Fazl (JUI-F). He said that He will himself attend it from the very first day and asked ANP workers to join him for fresh free and fair polls in the country.

Khan was addressing the Provincial Council of ANP at Bacha Khan Markaz in Peshawar. He said that ANP supports Maulana’s Azadi march and is devising ways to cooperate with Maulana Fazl Rehman. “It has been decided that I will attend the long march of JUI-F and it is hoped the party workers will join me,” said Asfandyar in his address.

Asfandyar Wali Khan made it clear to the KP Chief Minister that if any political worker was tortured or stopped on October 27, the ANP would strongly respond and would call workers to come on the streets as when the democratic way is blocked, people would have no choice but to choose unconstitutional and undemocratic way to achieve their constitutional rights.

The ANP chief while talking about the objectives of the march said that the opposition wants the end of the PTI government and transparent election in which all the institutions will work within their constitutional boundaries.  Terming the action in aid civil ordinance equivalent to martial law, the Asfandyar said that the ordinance was a violation of the constitution. “This law hasn’t been implemented in any other province of the country but it is being implemented in KP. The matter is in court and we hope that the court will decide based on justice.”

Khan alleged that today that the PTI government is hell-bent to rollback the eighteenth constitutional amendment and abolish the provincial autonomy.  The ANP President said that the NFC award is not being announced because, under the new NFC award, the share of provinces is more than federal, therefore, it’s acceptable to the selectors.

Talking about the Kashmir dispute, Asfandyar said that the ANP’s position on Kashmir is very clear on the issue. According to the ANP, today in Kashmir, India wants to impose its views on Kashmiris and curfew has been imposed to press Kashmiris. “The ANP wants to solve the Kashmir issue in light of UN resolutions,” said the ANP Chief.