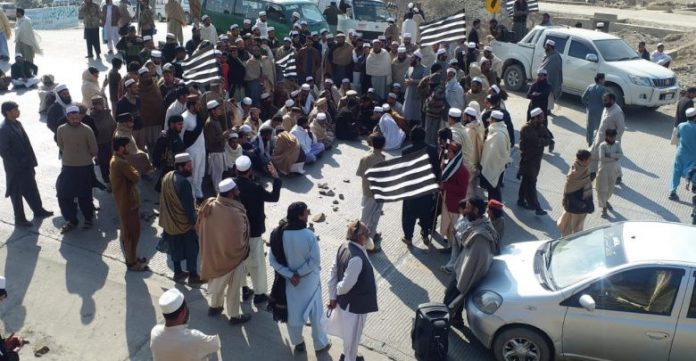 PESHAWAR: Jamiat Ulema-e Islam–Fazal (JUI-F) workers staged a protest against the ban on the Non-Custom Paid (NCP) vehicles in Landi Kotal on Monday.

A large number of party workers gathered at the Landi Kotal Bazaar and chanted slogans against the administration. The protesters were holding party flags, banners and placards inscribed with slogans in favour of their demands and closed the Pak-Afghan road for all sorts of traffic.

The JUI-F chief of Khyber District, Mufti Ejaz Shinwari, who was leading the protest said that the ban on the NCP vehicles is injustice with the low-income people of tribal areas, whose economy is already destroyed and are facing lack job opportunity in their districts. “The ban has rendered thousands of people jobless,” said the JUI-F leader.

The JUI-F local leaders said after the merger of tribal districts with Khyber Pakhtunkhwa, the government should give a special package for ten years to grant relief against taxes and allow the NCP vehicles to operate freely in all the tribal districts.

Mufti Ejaz demanded the immediate lifting of the ban on NCP vehicles’ movement in the Khyber district so that people could resume their business activities. The JUI-F leader warned that if their demands were not fulfilled until next Sunday, they will be forced to launch a massive protest against the government.

On September 30, The Federally Board of Revenue (FBR) allowed the NCP to be used in the erstwhile Fata/Pata for a period of five years ending on 30th June 2023. However, these vehicles are seized if they cross over to other areas of Pakistan.

Mufti Ejaz said that despite notification from the FBR, the NCP vehicles were not allowed to cross the Bigyari checkpoint. The protesters said thousands of NCP cars have already been registered by Landi Kotal civil administration and waiting for temporary route permits.

After the protesters were ensured that the issue will be taken up with high-ups, the protestors cleared the road and vehicular traffic resumed.