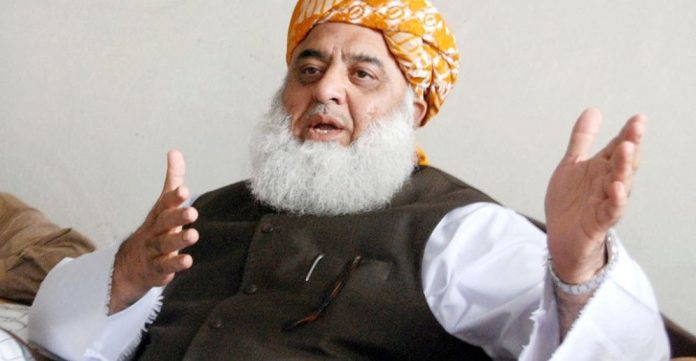 PESHAWAR: Maulana Fazlur Rehman, Chief of Jamiat Ulema-e-Islam – Fazal (JUIF), announced on Thursday that the party will launch the Azadi March against the Pakistan Tehrik-e-Insaf government on October.

Talking to the media in Islamabad, Maulana Fazlur Rehman said that all the opposition parties have agreed that the present government has come into existence with a ‘fake mandate’, and due to the ‘inability’ of this government, the economy of the country has plummeted.

Fazal said that the JUIF has made 15 million marches across the country and now it has decided that caravans from all over the country will arrive in Islamabad on October 27.

Fazal said that on October 27, we will have solidarity with the people of Indian Held Kashmir (IHK) as the present government has failed to properly raise voice for them. The Maulana said that he is in touch with the PPP and PML-N and will send the government home and end the march until; he sends the PTI government back home.

On the other hand, Pakistan Muslim League-N President Shahbaz Sharif has apologized to party leader Nawaz Sharif for leading his party in the Azadi march of Maulana Fazl-ur-Rehman. According to media reports, Shahbaz Sharif has met Nawaz Sharif at Kot Lakhpat Jail and informed him about Bilawal Bhutto Zardari’s meeting and freedom march.

Nawaz Sharif directs Shahbaz Sharif to participate fully in Maulana Fazl-ur-Rehman’s proposed Azadi march, however, Shahbaz Sharif declined to lead and replied, “My health does not permit me to lead the protest march. Doctors have suggested rest, on which Nawaz Sharif said that Allah gives you health and Ahsan Iqbal will lead the party in your absence.”

On the other hand, Nawaz Sharif has sent a message to Maulana Fazlur Rehman that inflation has made it lives of common men difficult and the government has failed to provide relief to people, therefore, he asked Maulana to set the ever-increasing inflation as the agenda of the protest march.