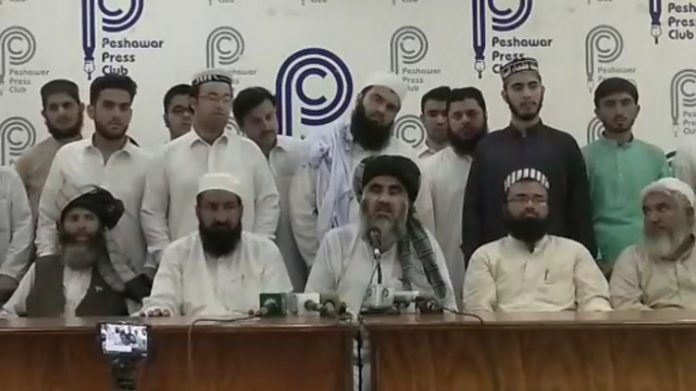 Abdur Shakoor, along-with party workers, was addressing a press conference at Press Club on Saturday. He was defending JUIF candidate for PK-115 Mohammad Shoaib against whom PTI candidate Abid Rahman has filed a case in Islamabad high court with a stance that he was winning with a lead of 3000 votes on the day of the election, but the returning officer withheld the results for the next two days.

“The ‘selected’ Prime Minister Imran Khan and his Chief Minister Mahmood Khan fully used the government resources to win the election in tribal districts,” alleged Abdul Shakoor “but the people badly rejected them to win in PK-115.” He said that on the demand of government votes were also recounted in PK-115, but despite recounting their votes were less than the JUI-F candidate.

The JUIF mentioned that the Pakistan Tehrik-e-Insaf (PTI) selected Prime Minister now forcefully changing the loyalties of the elected Members Provincial Assembly-elect which is tantamount to horse-trading.  He said that in FR seat PTI candidates pressing returning officers to reject the votes of JUI-F candidate however the returning officer did not succumb to the pressure of the PTI leadership and announced the results in favour of JUI-F.

He further said the government of PTI to have done a pre-poll survey and they were well aware that people would reject them in this election but later they blatantly used government resources to hide their failure.

He informed that in Orakzai tribal district the Jamiat Ulema Islam-Fazal supported candidate was forced to join PTI after winning his seat. He demanded of the Election Commission of Pakistan (ECP) to take notice of PTI pre-poll rigging which is now ‘forcing’ MPAs-elect to join PTI. He warned that if PTI leadership did not change attitude, then JUIF workers are ready to take the streets of Islamabad against the government.