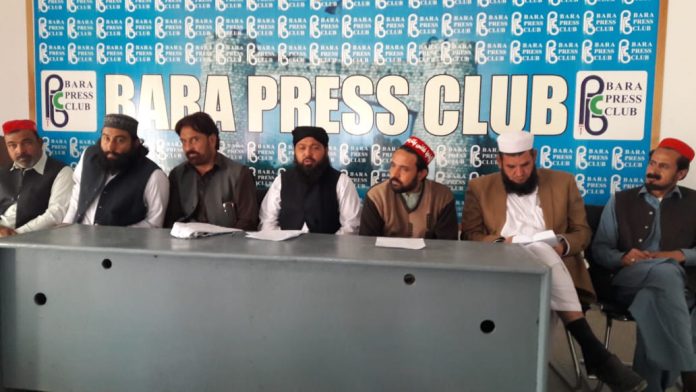 BARA: The Local leadership of Jamiat-e-Ulema-Islam –Fazl (JUIF) has announced to launch Plan C of ‘Azadi March’ in Khyber District under which a protest will be held in Bara Bazaar from November 30. This was announced by JUIF deputy Ameer for district Khyber Al-Hajj Shams Uddin on during a press conference on Thursday.

Addressing a joint press conference with local leaders of Awami National Party (ANP), JUIF leadership strongly condemned the desecration of Hoy Qura’an in Norway and demanded to stop such incidents in the future.

On the eve of the press conference, the United Opposition issued a joined statement saying that they condemned the imposition of tax on the people of tribal areas after the merger despite the tall promises of relief of tribal districts at the time of the merger. They said that the promises made with the people of tribal districts before the merger has not been fulfilled by the government and their resources are now being snatched by the authorities.

Responding to a question, Al-Haj Shams Uddin said that neither shop nor any highway would be closed in protest so that the public or their businesses would not be hurt due to the protests.

Other participants of the joint press conference included JUI’s Mufti Kafil, PML N District Khyber Leader Zahir Shah, ANP Khyber Secretary-General Siddique and Gulab Din. The JUIF, ANP and PMLN leadership made the assurance that their protest will be very peaceful like they have observed the Azadi March in Islamabad.