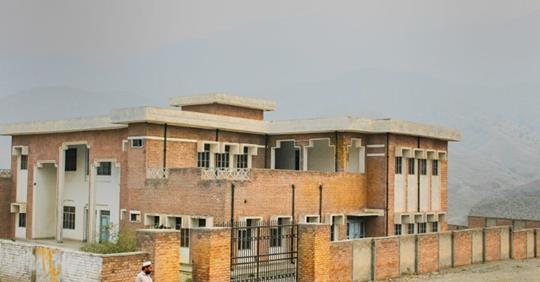 PESHAWAR: Khyber Pakhtunkhwa government has decided to start classes in Government Polytechnic Institute Shalman at Tehsil Landi Kotal on emergency basis, said advisor to the Chief Minister on information technology, Kamran Bangash on Friday during his visit to the institute.

Constructed at a cost of Rs11.36 million by the Communication and Works Department, the building was handed over to the Technical Education Department of the erstwhile Fata secretariate in June 2001. Since then the two-storey building is lying useless for want of teaching staff. It is building, with a covered area of 14,041 square feet, comprises two big halls, two workshop rooms, two examination halls, a library, two classrooms, office for the principal and a staff room.

The minister said the KP government has taken the imitative as a part of efforts towards mainstreaming tribal areas merged in Khyber Pakhtunkhwa. He also met with tribal elders and assured them the government full cooperation in for the development of the tribal area. The minister announced the electricity will be provided through generators and solar system, while efforts are also underway to arrange for 3G and 4G internet facility at the institute.

Bangash during his visit of the closed technical college also examined the infrastructure condition for launching educational activities. On this occasion, the Special Assistant said that the institution would be started very soon adding that it will be used for multiple proposes and programs of Information Technology and Computer would also be taught here to equip the local youth about the emerging technologies.

He said the college would be converted into a technology University for technological education facilities of Khyber District. Bangash remarked that tribal people were patriotic and peaceful but unfortunately, they had been negatively portrayed. “The marginalized society of erstwhile FATA needed development that was why the government trying to materialize the mainstreaming process of these backward areas as soon as possible,” Kamran remarked.

He further said the government was committed to providing equal opportunities to tribal areas like rest parts of our province. He thanked the tribal elders for their warm hospitality. During the day-long visit, Director of Science and Technology Dr Khalid Khan, Assistant Commissioner Landi Kotal Muhammad Imran and relevant officers also accompanied the minister.