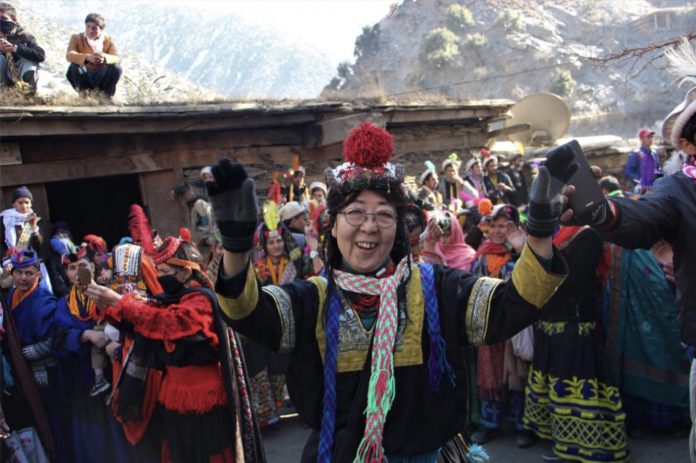 PESHAWAR: Kalash winter festival Chitirmas or Chawmoss is now its final stages. Besides the local, a number of foreign tourists have already arrived to celebrate the event with indigenous tribe.

Senior KP minister Muhammad Atif Khan on Thursday announced Rs560 million for highlighting the Kalash culture to the world. He also ensured that full security for the participants of the final ceremony to be held on December 22.

An ostentatious display of various cultural rituals, including Savilakehari, Mandahek, Sharaberayak among others have already been made during the in the ongoing Chawmoss festival.

The Shishaw has been performed after which the Kalash community doesn’t touch outsiders. Gosnik was observed in which three to five years old boys and girls wear new dresses with lots of walnut breads, fruits, gifts and locally made embroidered clothes. Their uncles bring goats and sheep to give them as a gift for their nieces and nephews.

In Savilakehari festival, men, women and children wearing new and colourful clothes gather at a place and sing love songs for each other. They dance together and praise each other. Young Kalash girls wear boys dresses and boys clad themselves in girls clothes and dance in chorus. They express their feelings for each other and announce their marriage. The children also gathered at their sacred place, collected twigs and branches of pine trees and made bonfire to show skills in making high flames and smoke.

Making high flames and smoke is meant to welcome peace, prosperity, minerals, green grass and love among the people of the indigenous tribe in the ensuing winter and spring seasons. The children while holding green leaves and branches of trees also sang songs and performed chorus to enjoy the festival.

Member Provincial Assembly Wazirzada on Thursday visited Kalash valley and reviewed arrangements for the grand gala to be held on the final day of the festival. The Tourism Corporation, Khyber Pakhtunkhwa has also installed lighting system and made arrangements for transport and other facilities.

Khyber Pakhtunkhawa Senior Minister has issued directives to the concerned officials to provide every facility to the locals and foreign tourists. The senior minister has assured that besides foolproof security, lighting and transportation to the tourists and local residents to celebrate the event in a peaceful atmosphere.