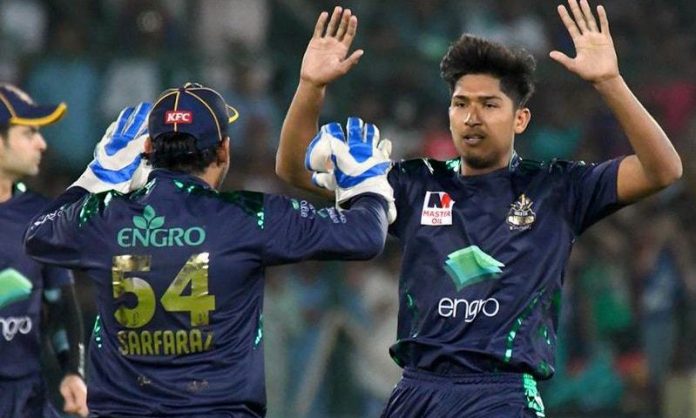 PESHAWAR: Karachi Kings clinched a thriller in their first appearance before the home crowd in the Pakistan Super League (PSL) by one run and sealed a spot in the playoffs.

Karachi Kings were put into bat in front of home crowd and they put a challenging total of 190 for the loss of five wickets. Babar Azam was again spectacular with the bat with his 56 runs, while Iftikhar Ahmed scored 44.

For Gladiators, Mohammad Hasnain got two wickets, while Fawad Ahmed, Mohammad Nawaz and Sohail Tanvir got one wicket each.

Gladiators were well within the range until the last over needing just five runs with six wickets in hand. But it turned out to be catastrophic for Gladiators as Usman Shinwari not only took three wickets, but also caught them one run short. Ahmed Shahzad was unlucky for missing his hundred by just one run, while Umar Akmal scored 27.

For Kings, Usman Shinwari and Umer Khan took three wickets each. Shinwari was declared player of the match. Shinwari said after the match that he planned of using the old ball and it worked for him.

“We know that bowlers can get hit for fours and sixes in a game, so we can’t get disheartened when that happens. Need to just lift ourselves for the next delivery, and that’s what paid off now,” he said.

Karachi captain Imad Wasim said he advised Shinwari not to give up. He said the pressure is off from Kings after qualifying for playoffs.

Gladiators captain Sarfraz Ahmed was impressed by the crowd support for both teams. He said Ahmed Shehzad played an excellent innings, but Shinwari trumped that in the final over.

The result of Sunday’s match means Lahore Qalandars are now out of contention for playoffs along with Multan Sultans. Quetta Gladiators, Peshawar Zalmi, Islamabad United and Karachi Kings are now firmly in the playoffs.

Two matches will be played in the PSL-4 today (Monday). In the first match, Lahore Qalandars will face Multan Sultans at 2:00pm (PST), while in second match, Karachi Kings will face Peshawar Zalmi at 7:00pm (PST).

The clash between Sultans and Qalandars will decide who will end up at bottom of the points table. Qalandars are occupying the bottom for the last three years, and they are still in the fear of ending up at bottom for fourth consecutive year.