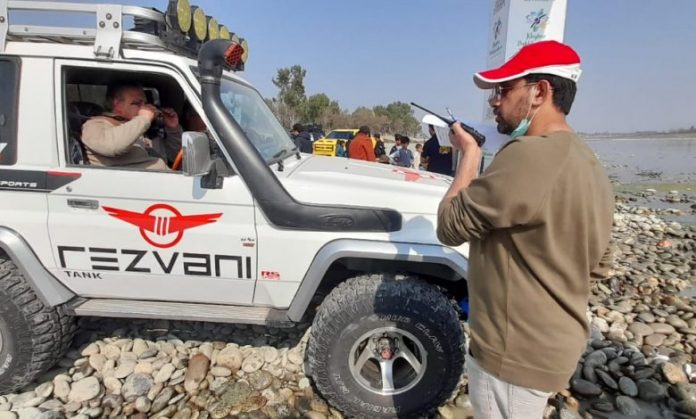 PESHAWAR: Indus Water Cross Jeep Rally 2021 was organised on Friday at the Indus River at Hund point in Swabi to express solidarity with people of Indian Occupied Kashmiri (IOK) for their right to self-determination.

This year, the event was organized by the Khyber Pakhtunkhwa Culture and Tourism Authority on Kashmir Solidarity Day to draw the attention of the world community towards Indian atrocities in IOK. The event was organized under the aegis of KP Sports, Tourism, Archaeology, Culture, Museums, and Youth Affairs Department with the cooperation of the Frontier 4×4 Club.

Secretary Tourism Department Muhammad Abid Majeed was the chief guest, while officials of the Tourism Department, Swabi district administration, Rescue 1122, jeep racers and a large number of spectators were also present on the occasion. Over 60 jeep racers, including women drivers, participated in the spectacular race this year. The drivers of 4×4 jeeps from KP, Punjab, Sindh, Balochistan, Gilgit-Baltistan, and Azad Kashmir took part in the rally. One of the woman drivers hails from Mohmand tribal district.

The drivers, including Lalain Akhunzada, Gul Sheen, Ayesha Bibi and Salma Khan, crossed the tough and rough track of stones and rocks erected over the waters of the mighty Indus River for the jeep racers. In the women’s category, Gul Sheen stood first with 03:03 minutes, Lalain Akhunzada second with 03:31 minutes and Ayesha Bibi clinched the third position with 04:57 minutes.

Speaking on the occasion, Abid Majeed said that the event was aimed at highlighting the atrocities of Indian troops on the people of Occupied Kashmir. He said the Rescue 1122 also organised boats parade and archery competitions to draw the attention of international community and rights organizations towards the stumbling issue between Pakistan and India.

Abid Majeed said six successful snow festivals were organized in the scenic spots of Malakand and Hazara divisions in the current winter. He said Dera Festival would be held in March to promote tourism activities in the southern districts of KP.