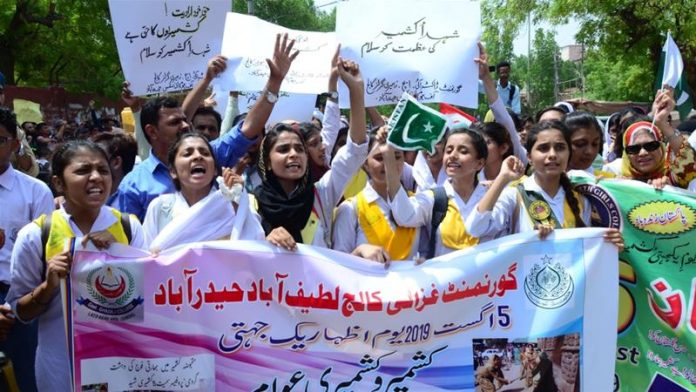 PESHAWAR: With a complete security lockdown and the house of arrests of elected representatives in Indian Occupied Kashmir (IOK), Modi government on Monday scraped the article 370 of constitution depriving the people of Kashmir of autonomy and special status they were entitled in 1949.

Before revoking the disputed Kashmir’s special status with a presidential order, thousands of troops were deployed and internet and phone services were cut and elected representatives, including former Chief Ministers, Mehbooba Mufti and Omer Abdullah were placed under house arrest.

The article 370 has provided autonomy to Jammu and Kashmir (J&K) and allowed the state to have its own constitution, a separate flag and independence over all matters except foreign affairs, defence and communications.

The government of Pakistan has strongly condemned the Modi governments’ decision saying that it all possible options were to be exercised to counter ‘illegal steps’ taken by India in Indian held Kashmir. The opposition parties also issued statements saying that they are united on the issue of Kasmir and asked the President to call a joint session of parliament “in wake of Indian aggression”.

The leaders of both the leading opposition parties said that they are united for Kashmir. “Atrocities in Indian Occupied Kashmir (IOK) are unabated. Extremist Indian governments’ intentions are clear. President must immediately summon Joint session of Parliament in wake of Indian aggression in IOK,” said Bilawal Bhutto Zardari on twitter.

Shahbaz Sharif also asked the government that after reviewing the situation, a comprehensive strategy should be formulated therefore, he asked for a joint session of parliament to discuss and devise an effective strategy.