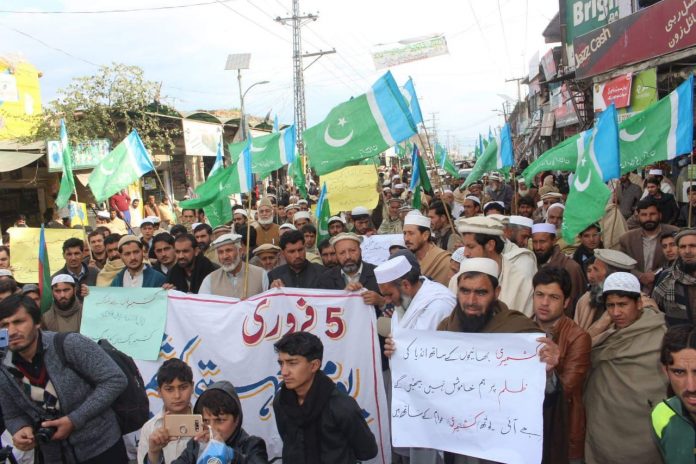 PESHAWAR: The Kashmir Solidarity Day was marked Tuesday across Khyber Pakhtunkhwa and tribal districts with the renewed pledge to lend moral support to the people of India-held Kashmir in their struggle for freedom.

In Bajaur, the Kashmir Solidarity Day was observed to expressed unity with the people of Indian-occupied Kashmir. Different political and religious parties were organized rallies and gatherings where the participants strongly condemned the Indian government for human rights violations.

The main rally was organized by Jamaat-e-Islami’s local leadership that took place at the district headquarters, Khar which was attended by scores of party workers and residents. Holding placards and banners inscribed with slogans against the Indian government and support of Kashmiri people, the participants chanted slogans against Indian government for Kashmir’s right of self-determination.

In another rally was organized by PTI where MNA Gul Zafar Khan and others renewed the pledge to continue moral, political and diplomatic support for the oppressed people of Kashmir. They also lauded the federal government for highlighting the Kashmir dispute on different forums.

In South Waziristan compound, Tank, the additional deputy commissioner Dil Nawaz Wazir taken out a rally in which a huge number of tribal elders participated. The rally ended at outside the press club in which the assistant commissioner Yousaf Ali, security in charge Zafar, FDMA coordinator Sayd Umar Mehsud and tribal elders participated. They were holding placards inscribed with slogans against the Indian government and asked the United Nations to provide the Kashmiries with their right of self-determination. They also offered special prayers for Kashmiri people.

In Orakzai Sub-division Kalaya, district administration observed the Kashmir solidarity day and paid homage to the sacrifices offered by the people of Kashmir during their freedom struggle. Assistant Commissioner, Kalaya, Muhammad Abbas Khan, district administration officials, tribal elders, and students of the districts participated in the rally. Students also delivered speeches and shouted full-throat slogans against the Indian government and for the rights of Kashmiri people.

The Kashmir solidarity day was also observed in Orakzai district, Hangu and Kurram where the speakers express solidarity with Kashmiri people and said their sacrifices spread over the 70-year will never go to waste and Kashmir will become the part of Pakistan soon. They urged the international community to press upon India to implement the United Nations resolutions on Jammu and Kashmir.