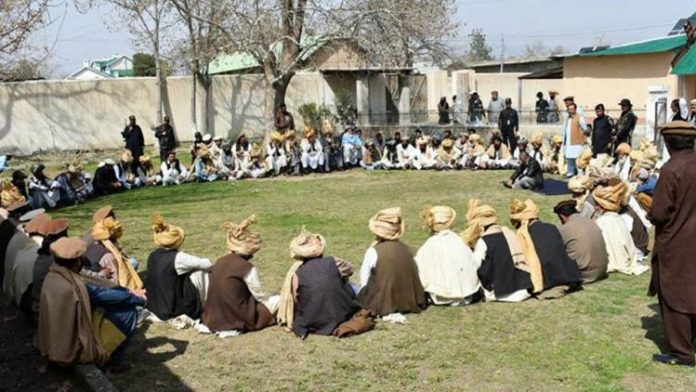 MIRANSHAH: The elders of Khadikhel tribe of North Waziristan tribal district have alleged that the local administration instead of resolving their dispute with the rival tribe have further complicated the issue by accepting bribe from them to do them favours.

The tribal elders said they will lodge protests through different methods to get their right which will also include boycott from the polio vaccination campaign. They said thousands of children will remain deprived of polio vaccination if they went for the boycott and the responsibility of the consequences will rest with the administration.

The elders of Khadikhel tribe explained that a dispute emerged with Machikhel tribe on the ownership of five houses and a mosque in October last year. They said members of both the tribes also clashed over the issue in which several people were injured.

The Khadikhel tribe elders said while addressing a press conference at Peshawar Press Club that the local administration had arranged a Jirga to resolve the issue. They claimed that the Jirga had declared Khadikhel tribe responsible for the dispute because they were not prepared to submit security to the Jirga elders nor they were prepared to cooperate with the Jirga to find an amicable solution to the dispute.

The tribal elders said despite lack of cooperation from Machikhel tribe, the Jirga elders took all the five disputed houses and a mosque into their custody and demolished them. They alleged that the administration took this step after accepting Rs20 million bribe from Machikhel tribe. They claimed that they possess proofs and evidences to support their claim.

The Khadikhel elders asked the administration to reconstruct the demolished houses and mosque immediately. They warned to boycott the next month’s polio vaccination campaign and block power supply to the whole Waziristan if their demands were not accepted. They also warned to stage protests on roads and block traffic.

The tribal elders said after implementation of reforms in the tribal districts, the Peshawar High Court has declared such kind of Jirgas illegal. They also announced to file a contempt of court case against the deputy commissioner and assistant commissioner Mir Ali.