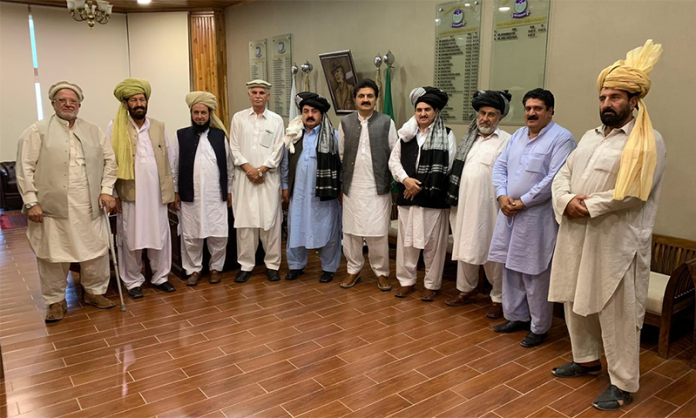 PESHAWAR: The adviser to chief minister on tribal districts, Muhammad Ajmal Wazir has held talks with tribal elders for the peaceful resolution of Khar Kamar issue and efforts for normalization of situation in North Waziristan tribal district.

The tribal elders assured Ajmal Wazir that they will play an active role in maintaining a peaceful environment in North Waziristan tribal district where peace has been restored of decade’s long struggle of security forces and tribal people. They also stressed the government to provide a compensation package to the victims of the brutal Khar Kamar incident. The government and tribal elders agreed that the issue will be solved in peaceful manners and in the best interest of tribal people.

The adviser to the chief minister on tribal areas, Ajmal Wazir also informed the elders that the provincial government has already announced a compensation package for the victims and cheques will soon be distributed among them. The KP government has announced Rs2.5 million for those who lost their lives while 1 million for the injured.  Ajmal Wazir also invited the jirga members to Peshawar to further discuss the situation.

The situation in North Waziristan was destabilized after the May 26 Khar Kamar incident in Boya area of Tehsil Data Khel, where 13 protesters lost their lives in a clash with security forces. The security forces had accused the protestors of attacking their security check posts. The protestors were led by two members of the national assembly, Ali Wazir and Mohsin Dawar. Both the leaders are currently under arrest. An ATC court, in Bannu, has remanded both the MNAs to the CTD police on eight days remand.