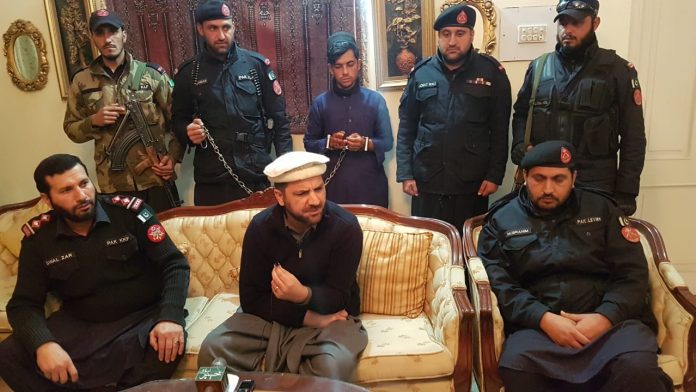 LANDI KOTAL: The District administration Khyber has claimed to have solved the murder mystery of a young man, Noor Ur Rahman who was brutally killed on Friday night in Landi Kotal.

The administration added that they’ve arrested the accused Amir Shinwari Khoga Khel, who has accepted that he has brutally killed Rahman. According to administration, Rehman’s dead body dumped near Amir Hamza Baba mausoleum after he was slaughtered to death.

The body was taken to the nearby hospital and after proper identification; it was handed over to the bereaved family. The horrific murder grieved the whole area and people asked the Security forces arrest those involved without any delay.

During the press conference at his office, the assistant deputy commissioner, Muhammad Imran Khan said that Levies and Khassadar forces have arrested the murderer of Noor ur Rahman Shinwari within 17 hours, which he termed a big success.

He said that though the forces have no latest technology and instruments to investigate the murder mystery, however, they have used their intelligence and professional skills to probe the case within a very short time. In this regard, the official said, Subedar Swal Zar Khan Afridi and assistant line officer Ibrahim Shinwari has played an important role.

The officials told media thought the assailant has been arrested However, still they are conducting further investigation as the actual reasons behind the horrible murder of the young man are still unknown.

The accursed Amir Shinwari was also presented before the media, who has also accepted his crime before the newspersons. The accused said that he has murdered Noor ur Rahman as for the last five years, he was continuously harassing him.  “I have killed him because I wasn’t secure. He was harassing me for the last five years,” the accused Amir told media. However, the administration said that they are still conducting investigation and will reach to the actual reasons behind the murder soon.