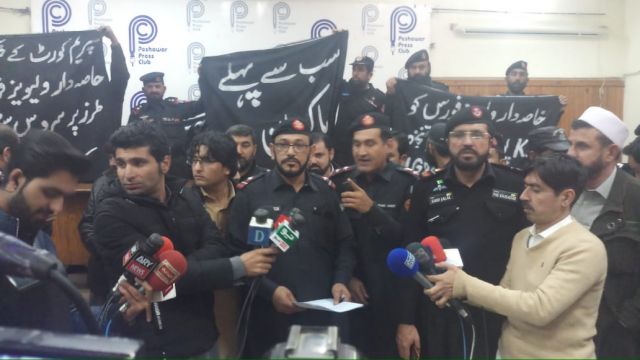 PESHAWAR: The All Fata Khasadar Force Committee demanded the Khyber-Pakhtunkhwa (K-P) government to induct them into the provincial Police department, otherwise, they’ll move to Islamabad in protest.

The officials of the force formed an 80-member committee to secure their services in the wake of the government’s decision to extend the Khyber Pakhtunkhwa Police Act, 2017, to the tribal districts.

The Khasadar force’s representatives while addressing a press conference on Monday said that the reforms process is underway now after the passage of the 31st constitutional amendment but the fate of the Khasadar force hangs in balance as no framework has been made regarding the future of the force in a post Fata merger with Khyber Pakhtunkhwa.

Subedar Major Said Jalal, the president of All Khasadar force’s committee said that the force has rendered huge sacrifices for maintaining peace and order in the tribal belt over the last almost one century. Therefore, Jalal wanted the KP government to provide them with the packages and facilities at par with the police force of the province.

Jalal made it clear that they are not against the FATA reforms and the merger of the tribal areas with the province but the promises made with them by the Prime Minister, Imran Khan must be fulfilled.

Roughly some 30,000 khasadar and Levies forces personnel in tribal areas now fall under the KP inspector genial of police, but they believe that their future is not secure as the government has so far not devised any future plan for them. They want the government to redefine the roles and responsibilities of the two forces, but there is complete silence over this issue, thus leading to frustration within the forces’ ranks.

The personnel of the force asked the Chief Minister Khyber Pakhtunkhwa Mehmood Khan, Prime Minister Imran Khan, Corps Commander Peshawar and Army Chief to provide them assurance that their future will be secure in the province. Otherwise, they warned the government, of protest demonstrations in Islamabad.