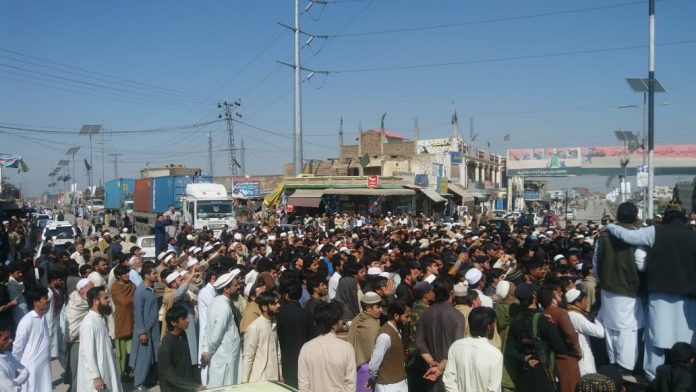 BARA: Pakistan Tehrik-e-Insaf member national assembly Haji Iqbal Afridi has assured the protesting Khasadar and Levies forces on Saturday that he will raise the issue with the KP and the federal government.

The PTI MNA was addressing a protest gathering of Khasadar and Levies men in Bara Tehsil against the Police deployment in tribal districts and delay in fulfilment of promises made by the federal and provincial government with the paramilitary forces at the time of the ex-FATA merger with the Province. Afridi assured his full support for the rightful demands of Khasdar and Levies forces.

Besides a large number of paramilitary forces personnel, trader union members also joined them vowed to protest until Khasadar and levies men aren’t given their right. Protestors warned the government that until the issues of the Khasadar forces are not resolved, they will not accept the extension of Khyber Pakhtunkhwa Police department to tribal districts.

The protestors in Bara Tehsil said that today, the Khasadar and levies forces are in protest throughout the tribal districts, and warned that the protest can be extended to other parts of the country if the government failed in fulfilling their demands and providing their rights. The protestors asked the government that when a force is already available who are much experienced and know very well about their area, then why they can’t be inducted in police force? They questioned the government. They added, today they are in protest as both the federal and provincial government have promised that they will be inducted in the police, then why now the government has backtracked from their promises?

“The former IGP and KP government has made the promise that they Khasadar and levies men will be inducted in KP police department,” said Sobedar Jahangir Khan while addressing the gathering. Khan added that they have placed 22 point agenda before the provincial government which also include the complete protection of jobs for Khasadar and levies forces.

Haji Iqbal Afridi while addressing the gathering said that he will raise the issue with the government and will request them to resolve their issues so that all the tribal people get maximum benefits of the Tribal areas merger with the province.