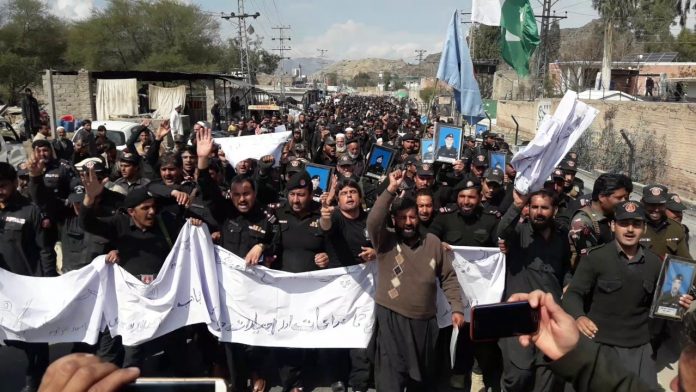 MOHMAND: Hundreds of personnel of Khasadar and Levies forces staged a rally here on Thursday against the deployment of provincial police in the tribal districts. They warned that they will strongly resist the police if they crossed the Bab-e-Mohmand as it was the paramilitary forces that offered sacrifices to maintain peace in the tribal belt.

The protestors were demanding their merger into the police department in tribal districts as promised with them by the federal and provincial governments. They were Carrying photos of slain Khasadars and Levies men, banners and placards inscribed with their demands, the protesting personnel marched and gathered at Captain Roohullah Shaheed stadium in tehsil Ghalanai where a large number of workers of different political parties and social activists also joined them in the protest to protect their rights.

The protesters chanted slogans against the government and senior officials of police for not merging them into the police department. They decided that the government had promised to merge all personnel of Levies and Khasadar into police when the policing system was introduced in the tribal districts. However, they said that government and senior officials of police were not ready to fulfil the promise.

The protesters said that the delay in issuing of official notification regarding the merger of Levies and Khasadar into police created unrest among 29,000 personnel of both the forces in the tribal districts.

Awami National Party district leader Nisar Mohmand, Pakistan People’s Party leader Arshid Bakhtiar, Subedar Major Pasham Gul, Levie’s officer Yousaf Khan and others addressed the protest rally and vowed that until their rights are not protected, they will not allow the deployment of police force in tribal districts. They strongly criticised the government for not fulfilling its commitment.

They said that Levies and Khasadar forces in all tribal districts in general and Bajaur in particular rendered great sacrifices in the fight against militants. The speakers said that 89 levies personnel have been martyred in Mohmand during the years-long militancy,

The speakers urged the government to acknowledge the services and sacrifice of personnel of both the forces by accepting their demands to merge them into police.  They appealed to Prime Minister Imran Khan to take notice of the issue and merge all the personnel of Levies and Khasadar into the police department.