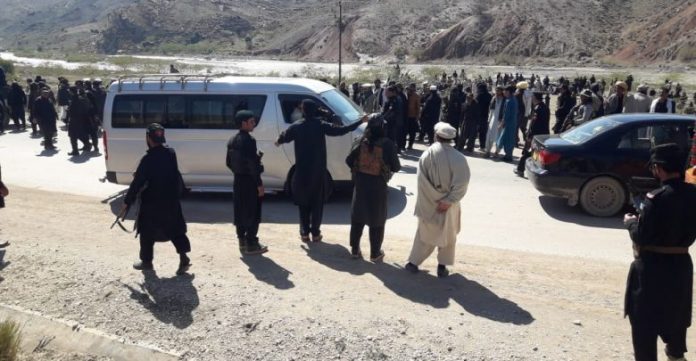 MIRANSHAH: The Khasadar and levies forces personnel have blocked Miran Shah-Miranshah road as a protest to stop the KP government officials from attending the gathering of Chief Minister at North Waziristan on Saturday.

The Khasadar and levies force officials were in protest against the KP government in the delay in their merger with the KP police department. The Khasadar has announced that they will block all the road to prevent the CM from visiting the district. Due to the protests, a number of government vehicles were sent back to the Bannu district.

The protesting Khasadar personnel were gathered a Taka check Post in Kajhorai area also stopped the members of national and provincial assembly from visiting the political gathering of Chief Minister Mehmood Khan. On Taka check post area protest, the Khasadar of North Waziristan and FR Bannu were gathered and staff the KP government officials vehicles from visiting North Waziristan.

The Khasadar force has properly checked all the vehicles. On this occasion, tribal elders also joined them in their protest against the KP government.

On March 12, the All FATA Khasadar force has announced a mega jirga in Bagh-e-Naran, Peshawar.

The Paramilitary force across the tribal districts is protesting the delay in their merger with the provincial department as promised by the federal and provincial governments. They ’ve warned that if their demand weren’t fulfilled, neither they will allow the deployment of the police nor the chief minister will be allowed to enter to tribal districts.

They said that their elders have offered high sacrifices for the security of the country while serving in Khasadar force. Jalal added that now they are offering sacrifices and maintained peace in the region despite limited resources and privileges. They said that peace has been restored, the government should recognize their sacrifices. He asked the government that they are ready to be merged with the KP police or should be left as an independent identity, but they aren’t ready to render thousands of Khasadar force personnel jobless.