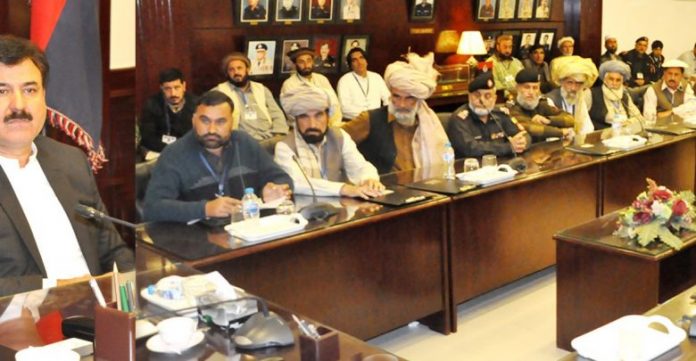 PESHAWAR: All Khassadar and Levies Force of the tribal districts has announced to completely support the Fata-KP merger and declared Inspector General Police (IGP) Salahuddin Mehsud as their chief.

After a meeting with Salahuddin Mehsud, All Khassadar and Levies Force, Chairman Subedar Major Syed Jalal Wazir said during a press conference at Peshawar Press Club on Monday that the Khassadar and Levies force of the seven tribal districts and six frontier regions are now part of the Khyber Pakhtunkhwa Police.

He added that they are ready for the merger anytime and All Khassadar and Levies highly value the sacrifices of the police force in the war against terrorism.

Syed Jalal demanded the government to release the salaries of the All Khassadar and Levies personnel which are being suspended for the last three months.

They said the Khassadar and Levies personnel and their families are going through a difficult period due to stoppage of their salaries. He said many Khassadar personnel have been forcibly retired from their jobs.

They said the Khassadars have given countless sacrifices for the country in the war against terrorism, therefore, the forcibly retired personnel should be restored. Syed Jalal said the seniority of the Khassadars has also been affected after the merger.

He said the Khassadars should be converted into police force in the same rank in which they are currently serving. He said all the facilities given to the police force must also be given to Khassadars. He said Khassadars will stage protests if their genuine demands were ignored.

Meanwhile, talking to TNN, Syed Jalal said the police chief has assured him that he will convey the grievances of Khassadars to KP Chief Minister Mehmood Khan and Prime Minister Imran Khan.

He said he will meet the chief minister and Corps Commander Peshawar Lt Gen Shaheen Mazhar Mehmood in the coming few days to discuss the problems of Khassadars.

‘No Khassadar will lose his job’

The KP government has taken strict notice of the forced retirements of the Khassadar personnel and assured them that their rights will be protected.

KP Information Minister Shaukat Yousafzai said after a meeting with representatives of Khassadar Force in Peshawar that the purpose of the merger is to give maximum facilities to the tribal people. He assured that no Khassadar personnel will lose his job.

The Khassadars told the minister that some deputy commissioners were pressurising them to take early retirement and they have also stopped their salaries. The minister said the KP police chief also belongs to the tribal areas and he is well aware of the tribal culture and traditions.

Shaukat Yousafzai said the police chief will never allow any injustice to the Khassadars. He said the Khassadars and other tribesmen have offered countless sacrifices for Pakistan which will never be forgotten. He assured that the rights of Khassadars will be protected at all costs.