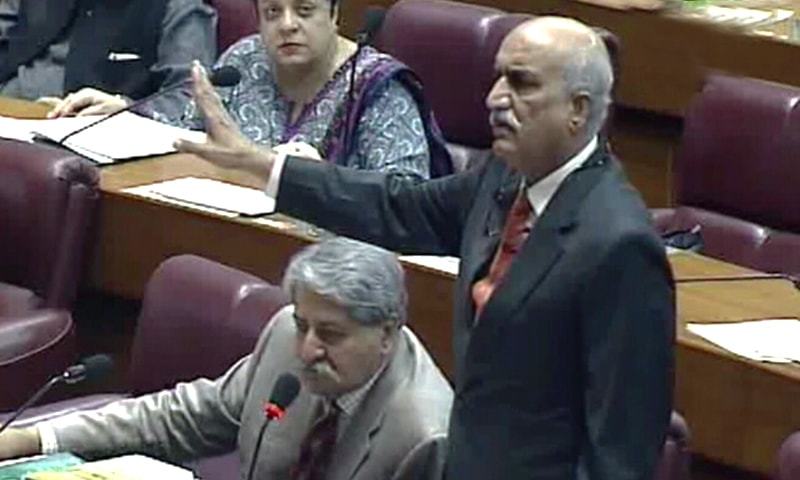 ISLAMABAD, 30 August: Leader of the Opposition in National Assembly, Khurshid Shah, on Wednesday demanded a joint session of Parliament to give a strong response to the United States President Donald Trump’s new policy for Afghanistan and South Asia.
Khurshid Shah made the demand while speaking in the National Assembly over US President Donald Trump’s new policy for the region. Speaker Ayaz Sadiq chaired the NA session.
Khurshid Shah came down hard on the government for its foreign policy failure and said that today’s session should have been started with the foreign minister’s speech but unfortunately this didn’t happen. He questioned the ousted Prime Minister Nawaz Sharif’s role as the country’s foreign minister for four years.
The Opposition leader proposed calling a joint session of the parliament after Eid so a ‘strong’ response could be given to the US policy.
Terming US President Donald Trump’s new policy of high significance, Shah blamed the country’s foreign policy ‘failure’ over the past four years on the government’s decision to not have a dedicated separate foreign minister. He also criticised Pakistan’s poor relations with most of its neighbours, saying “our neighbours hurl threats at us”.
Meanwhile, PML-N leader and former interior minister, Chaudhry Nisar Ali Khan agreed with the opposition leader’s call for a joint parliamentary session in wake of new American strategy for Afghanistan and South Asia.
Chaudhry Nisar said that Pakistan is not responsible for the failures of the United States and its allies in Afghanistan. He said that the US did not ask Pakistan before invading the war-torn nation. The minister said a major policy overhaul was needed to deal with the challenging situation. He said that the issue could not be resolved by mere resolutions and condemnations but they will have to overhaul the entire narrative towards the US.
The former interior minister said Pakistan had called for an international audit into US claims that it paid billions to Pakistan to fight terror “but the democratic country did not even respond to the proposal.”
Pakistan Tehreek-e-Insaf (PTI) leader Shah Mehmood Qureshi said that the whole nation is on one page against the US new policy.
Lauding government’s decision over consulting regional allies on Trump’s allegations, Qureshi urged that the government should also consult with Iran as suggested by Chaudhry Nisar Ali Khan.
Referring to a similar statement from Nisar, he said: “As a former foreign minister, I know how difficult it is to get reimbursements under Coalition Support Fund from the US. He said that Trump’s own statements contradict his present stance on the matter.
Calling US decision of taking India on board on Afghanistan policy a red-line, Qureshi said that former Afghan president Hamid Karzai, a favourite of the US, has also rejected Trump’s policy.
Coming down hard on US president, he said that Trump’s accusation have scuttled Pakistan’s efforts to ensure better border management with Afghanistan, adding that the international community should not forget Pakistan had given shelter to war-stricken Afghan refugees for years.