KARAK: The Administration of Khushal Khan Khattak University in Karak district has prohibited male students from sitting idly or roaming with girl students  and for this purpose a separate space has been created  for female students in the main library in the campus.

A notification issued by the office of Chief Proctor on October 23, 2018, said that several complaints had been received about inappropriate environment as rule of silence was violated by few students having company of friends or female in the library. Therefore, the office recommended that students should be strictly warned of doing any such activities that may cause disturbance in the library, the notification said and added that upon failure of obeying the order, strict disciplinary action may be processed against the violator through the office of chief proctor. 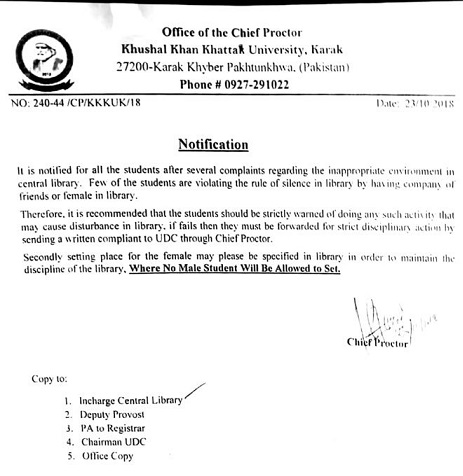 As per the new rules violators would be pentoalized without any further warning. However, the administration dismissed the news just a rumour and said no notification has been issued in this regard.

Director Admin Sadiqullah said that there was co-education in the university and ban on intermingling of students was baseless.

Last week, the KP provincial government banned participation of male dignitaries as chief guests in the functions of girls high schools, colleges and universities across the province due to cultural sensitivity. The decision was taken after a photo of a male chief guest in a girls high school in Peshawar went viral on social in which he was staring at a girl student.

Two years back, the University of Swat (UoS) withdrew a similar notification prohibiting male and female students to sit and work together in and off campus after facing criticism from students and other social and political circles on social media.